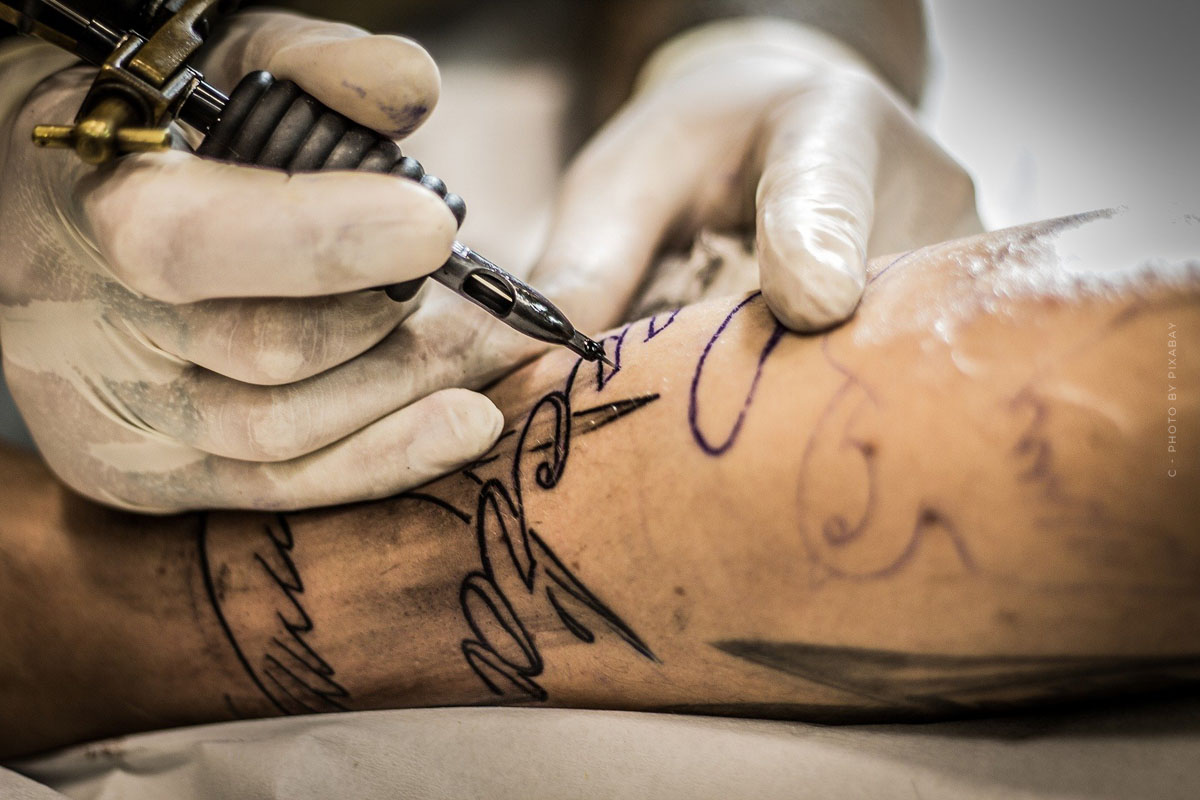 Footballers always attract attention with new tattoos. The athletes decorate their well-trained bodies with very personal love messages, inspirations and also the one or other childhood hero. No part of the body is off limits and many of the athletes are covered from head to toe with images and lettering. The most popular motifs and also how players have already incurred penalties for tattoos, we reveal to you here.

Overview hide
Tattoos from head to toe: rules and penalties in football
Lion motif: The king of the jungle inspires the sports world
Tattoos on his face?! This football star has dared
Neck tattoos: These footballers have opted for the painful spot
Tattooed backs: The motifs of the football stars
Unusual motifs: childhood heroes and comic characters

Tattoos from head to toe: rules and penalties in football

In the early 2000s, football star David Beckham set the trend that would last through the generations. While in the past the body decoration was often used mainly by subcultures and also prisoners to express belonging to groups, the images immortalized with the needle have also been used early in certain cultures as recognition and also to express special ranks and achievements.

Especially footballers, but also musicians have finally managed to pave the way of small works of art into the mainstream. For this reason, we would like to give you a closer look at the personal moments and things that get under the skin of professional athletes.

Tattoos are totally your thing? Then get inspired by our Pinterest board!

Rules: What is prohibited and can tattoos be punished?

Football is a sport of the community and especially the stars of the sport fulfill a role model function, especially for young fans. For this very reason, explicit tattoos and especially symbols that have negative and adult associations are not welcome.

Depending on the motive, violations of this moral code are dealt with differently. Here, above all, it is also relevant whether the tattoos are fresh or have already been put under the skin before the career.

However, fines in relation to tattoos could be observed in the past, especially in combination with violations of other regulations. For example, Corentin Tolisso, who was a player for FC Bayern at the time, got a new image engraved while he was supposed to isolate himself in the wake of the Corona pandemic. This breach of the rules was punished with a hefty compensation payment.

Lion motif: The king of the jungle inspires the sports world

An undisputedly very popular tattoo motif are lions. Strong, powerful, fast but also elegant, that’s how you see lions. These qualities also find the professional athletes desirable and are inspired by the impressive animal.

Paired with the saying ‘Only god can judge me’, a roaring lion adorns the upper arm of the German national team player. The motif is meant to give him power and strength so that he can continue to face opponents with pride.

Borussia Dortmund player, Marco Reus has also chosen a lion’s head among many other motifs, including his own name and date of birth. The image is paired with the words ‘the biggest adventure you can take is to live your dream’. We certainly hope that this inspiring message reaches his fans and that he himself is proud of his adventure.

After the Uruguayan footballer lost his hair after contracting the Corona virus, he didn’t let it get him down and decided to decorate the new, free body area with a lion’s head. Since then, the animal can be found on the back of the goalkeeper’s head and is hard to miss.

Tattoos on his face?! This football star has dared

The thin skin on the face is particularly sensitive and also exposed to constant UV radiation, which quickly causes fading of ink under the facial skin. For this reason, the tattoos are often avoided. However, the motifs and statements are particularly visible here.

This is probably the reason why Mario Balotelli decided to put his personal and political message above his eyebrow. Black Power’ is emblazoned there in a squiggly font and easy for everyone to read.

His stand against discrimination and the positive impact he can potentially have on young people of colour are definitely worth supporting and we understand why Balotelli chose da face as the place for this important tattoo.

Neck tattoos: These footballers have opted for the painful spot

Putting the needle on the neck is neither for tattoo artists, nor for the tattooed particularly fun, because sensitive organs are here very close under the skin and the natural defense reflexes of the body therefore particularly strong. Who decides for a motif on the neck must prove a lot of strength and stamina.

Footballers with tattoos on their necks – Neymar, Boateng and Nainggolan

Brazilian football legend Neymar has had ‘Tudo pass’ tattooed on his neck. The saying is supposed to give him strength and power in difficult situations.

A crown on the neck wears player of the German national team Kevin Prince Boateng. The tattoo was created in reference to his name ‘Prince’ and has primarily a decorative function.

A rose in traditional tattoo style adorns the throat of the Belgian-Indonesian player, who was signed by Inter Milan. Tattoos are a motif that was often used as filler in old-school tattoos. A beautiful rose belongs to the standard repertoire of every tattoo artist.

Tattooed backs: The motifs of the football stars

A particularly large area for extensive tattoo motifs offers the back. Here are often elaborate images brought under the skin. The creative playground, which is offered to the artist on back surfaces often leads to the most unusual creations in the interest of prominent clients.

If you personally have a large tattoo motif in mind, the back is also an option. Alternatively, you can also get tattoos on the chest and stomach, but these areas are almost more painful, depending on the muscle structure and the layer of fat that protects the internal organs.

Jerome Boateng and Leroy Sane: the most famous back tattoos

Jerome Boateng’s back is decorated with his family tree, the hand of Fatima and a portrait. The family tree, which includes 21 names, takes up almost the most space. The Hamsa forms an effective protection against the evil eye and is a popular protective tattoo.

Leroy Sane made headlines not too long ago with his new back tattoo. The reason for this actually lies in the motive, as the player decided to place himself on the football field in full glory on his back. This move raised voices of critics who associated it with arrogance or even narcissism. However, the reason is rather self-love and gratitude for the opportunities that life has opened to him.

David Beckham can not be missing in a list about tattooed footballers of course. For this reason, we have simply taken the football legend adorned all over his body to the athletes who wear tattoos on their backs, because here Mr. Beckham has immortalized not only his faith, but also his first son.

What’s more, Beckham is the best example against the cliché that tattoos look worse with age, as the footballer is still sought after by women all over the world. If you want to learn more about how to keep your skin smooth and tattoos glowing as you age, check out our skincare section for all the tips and tricks!

Tattoos don’t always have to be serious, they can also be casual and fun. For example, when players immortalize their childhood heroes or the characters of their favorite comic series on their body. These colorful and funny tattoos not only add to the exhilaration, but also speak to the character of the players who have chosen something uplifting in the jungle of serious and inspirational motifs.

The award for arguably the most outlandish tattoo in football goes to Daniele de Rossi. There are many memories immortalized on the player’s body in the form of tattoos, but none is as crazy as the Teletubbies on his inner arm.

What at first glance seems like a somewhat strange motif carries for the footballer but a much deeper meaning, because the yellow plush creatures are paired with the name of his daughter and remind him so every time he looks at them. So a personal value can be created even with somewhat wacky motifs.

https://fivmagazine.com/wp-content/uploads/2021/03/fusballer-tattoo-tattoonadel-taetowierung-balotelli-beckham-boateng-delrossi-strafen-hals-arm-gesicht-lowe-pflege.jpg 800 1200 Lisa-Marie /wp-content/uploads/2020/07/fiv-magazine-news-instagram-youtube-tiktok-influencer-fashion-interior-jewelry-real-estate-tips-help-logo.png Lisa-Marie2021-03-11 10:11:052021-07-17 17:06:46The coolest tattoos of the football stars: fancy body decorations on the face, back and More