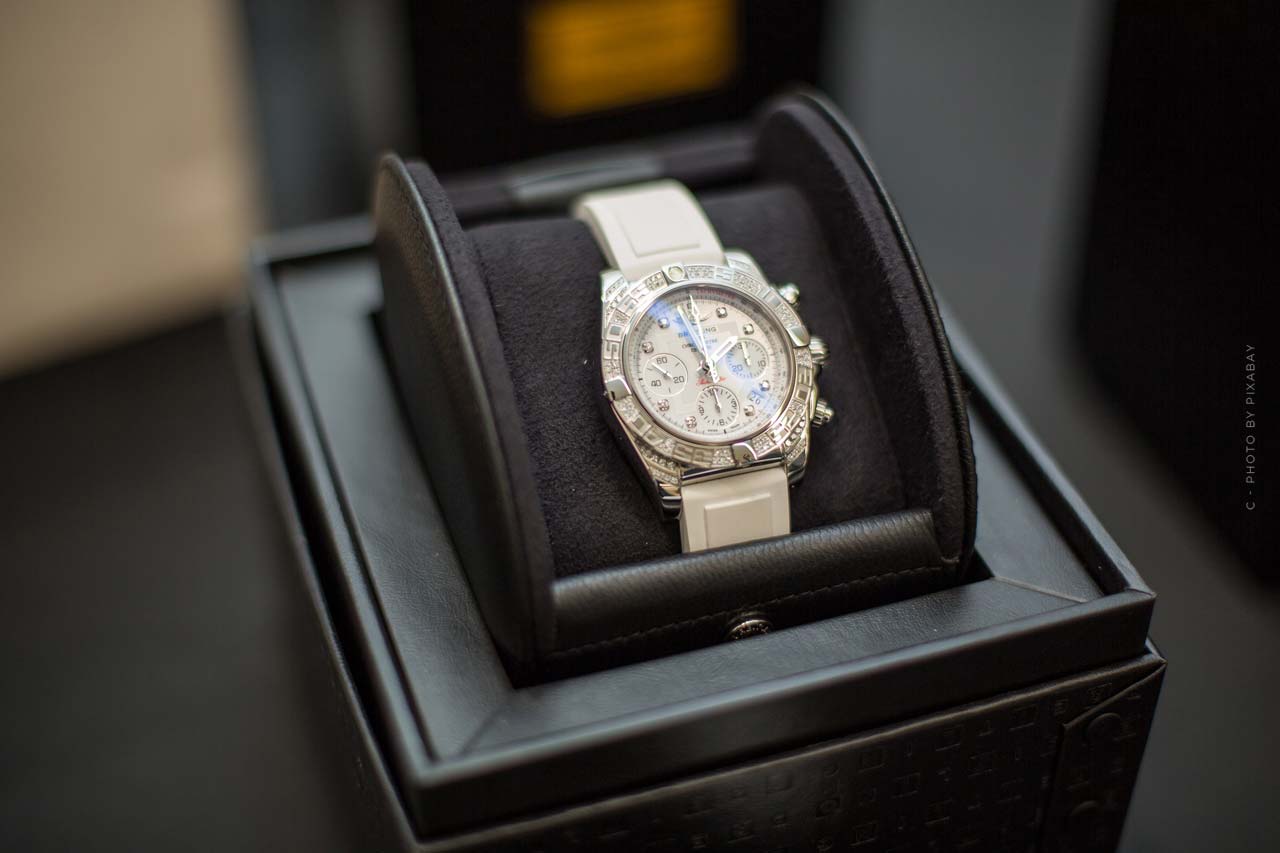 The most expensive jewelry in the world: diamonds, rubies, gold, platinum made by the best jewelers in the world. Graff, in particular, plays a huge role in the ranking of the most valuable jewelry. Diamonds are by far the most popular and well-known gemstone for lovers, jewelry lovers but also collectors. Diamonds are the hardest mineral on earth, so they can be used in jewelry for literally centuries without getting scratched. Did you know. The only mineral that can scratch a diamond is other diamonds! Diamond is therefore one of the most sought after mining products. Just like gold.

There is no precious metal in the world more sought after than gold. The famous “yellow metal” has been the standard by which wealth is measured for centuries, Even today, gold bullion is a primary means of private investment and wealth protection. Welcome to the world of gold, platinum, rubies and diamonds. The most expensive jewelry in the world: diamonds, gold & platinum!

The Hope Diamond is one of the most famous jewels in the world. It is a 45.42 carat, extravagant, dark gray-blue, cushion-cut antique diamond. The current value of the Hope Diamond is estimated to be around $200-250 million.

Buyer’s story of the Hope Diamond

The Hope diamond was discovered in Golconda, India. Its ownership passed into other hands several times. In 1688, the diamond was bought by King Louis XIV and called “French Blue”.

Until 1792, the jewel remained in the possession of the French royal family. During the French Revolution, times became turbulent. During a looting of the crown jewels, the diamond was stolen!

It was not until 1839 that the diamond reappeared in the catalogue of Henry Philip Hope’s gem collection. After passing through several more owners, including Pierre Cartier and socialite Evalyn Walsh McLean, the jewel was acquired by jeweler Harry Winston in 1949. Winston eventually donated the jewel to the Smithsonian Institution, where it remains on display today.

In fact, there are very few pictures of the diamond. I was very surprised when I did the research too! Here is one of the few shots that show the true color and also the gem around the diamond itself. 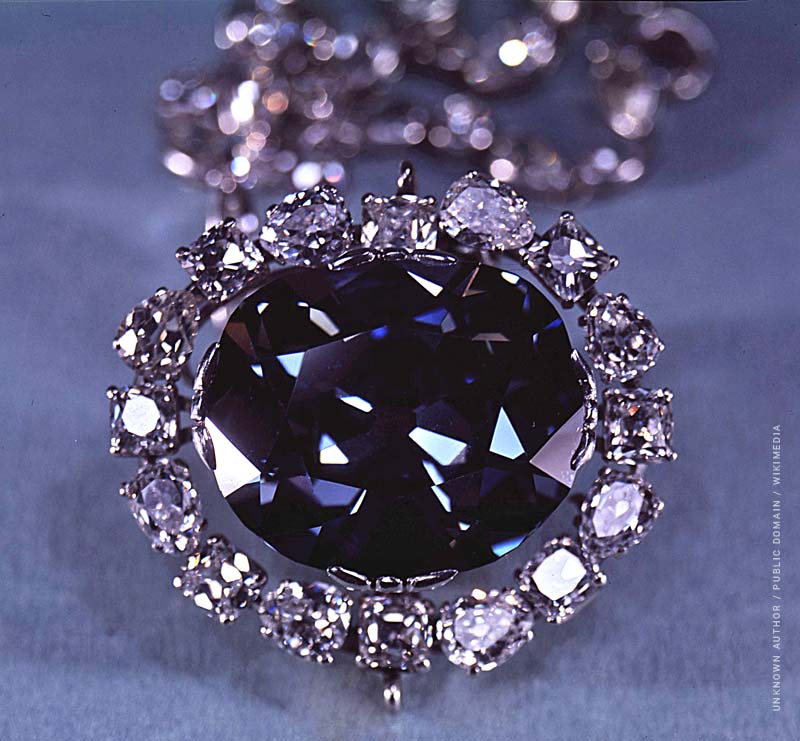 How much do people know about the most famous diamond in the world? How much is it worth? Who owns the Hope Diamond? How big is it?

This peacock brooch, unveiled in 2013 at the TEFAF luxury art and antiques fair in the Netherlands, has a total carat weight of 120.81g. This incredible display of beauty and extravagance from Graff Diamonds contains 1,305 gemstones and measures just over 10 centimeters in height.

The focus is on a central diamond. Its shape resembles a pear, the color scheme is dark blue and its weight alone is 20.02 carats. In addition to the central diamond, white, yellow, pink, orange and green diamonds are fanned out in the center of the brooch.

3 out of 10 top rankings go to a jewellery house: Graff. The manufacture is a real legend, based in London. The British multinational company (jewelers) of the 1960 founded by British jeweler Laurence Graff. As a vertically integrated company, Graff’s operations include the design, manufacture and retail distribution of jewelry and watches. Their unique one-of-a-kind jewellery pieces rank 2nd, 3rd and 9th – an incredible achievement by the jewellery manufacture. Read more here: Graff Jewelers.

The Wittelsbach-Graff diamond has 31.06 carats. Its exclusive characteristics make it one of the most sought-after jewels in the world. The Wittelsbach Graff Diamond is an extravagant deep blue diamond with flawless clarity inside the stone. Laurence Graff bought the diamond in 2018 for a whopping $22 million.

The stone was discovered in the 16th century, deep in an Indian mine. At first, the stone is said to have been in the possession of King Philip IV. Through the Emperor of Austria (Leopold I) and its use as part of the Austrian and Bavarian crown jewels, the stone came to the House of Graff in 2008. Jeweler Laurence Graff purchased the Wittelsbach diamond for $22 million.

Graff shows his talent here but also his willingness to take risks. After the purchase, he had the Wittelsbach-Graff diamond cut back to its current state. Today, the diamond is 31.06 carats, an ornate, deep blue cushion-cut diamond.

The recut improved the clarity and brilliance of the jewel and increased its value enormously. In 2011, the diamond was sold for over $80 million to its current owner, a member of the Qatari royal family.

In 2017, the “Pink Star” fetched $71.2 million at a Sotheby’s auction in Hong Kong. This made the stone the most expensive jewel sold at auction to date. The auction was not long, as the Pink Star was acquired in just five minutes by Hong Kong conglomerate Chow Tai Fook Enterprises. Only the Wittelsbach-Graff diamond surpassed it due to Graff’s skillful recutting. He increased the value of the Wittelsbach-Graff diamond from $22 million to $80 million.

Originally mined by De Beers in Africa in 1999, the Pink Star weighed 132.5 carats before being polished and restored to its current stunning condition.

The Oppenheimer Blue will be the largest vivid blue diamond ever sold at auction.

This blue diamond shocked the public when it sold for a whopping $57.5 million at a Christie’s auction in May 2016. At the time, this 14.62 emerald-cut stone, once owned by Sir Philip Oppenheimer, was the world’s most expensive jewel ever sold at auction.

In this video, François Curiel, Chairman of Christie’s Asia Pacific and China, tells the story of the Oppenheimer Blue.

Hard to believe but true. A little girl discovered the stone, amidst mine debris. In 1980, she found the L’Incomparable diamond in the mine tailings in the Democratic Republic of Congo.

Later, the 407.48 carat diamond is attached to a rose gold chain adorned with 230 carats of smaller diamonds.

In 2015, Hong Kong billionaire and collector Joseph Lau purchased this diamond ring for $48.4 million at auction and named it “Blue Moon of Josephine” after his 7-year-old daughter Josephine. The 12.03-carat blue moon diamond was discovered in 2014 at the Cullinan mine in South Africa.

For over 60 years, the Graff Pink was in a private collection, now it is owned by one of the most prestigious jewelry houses in the world. Through recutting, the recut 23.88 carat diamond displayed new color, clarity and inner flawlessness. “The Pink Legacy”, as the gemstone is also called, was auctioned in Geneva in 2010, at Christie’s auction house.

This Cartier necklace made of emerald green jadeite beads has many details and highlights like the ruby clasp, diamonds, platinum and gold. A real highlight for collectors and jewelry lovers. In 2014, the Hutton-Mdivani jadeite necklace was sold at auction for $27.4 million. This famous necklace was owned by Barbara Hutton, heiress to the Woolworth fortune, and Princess Nina Mdivani.