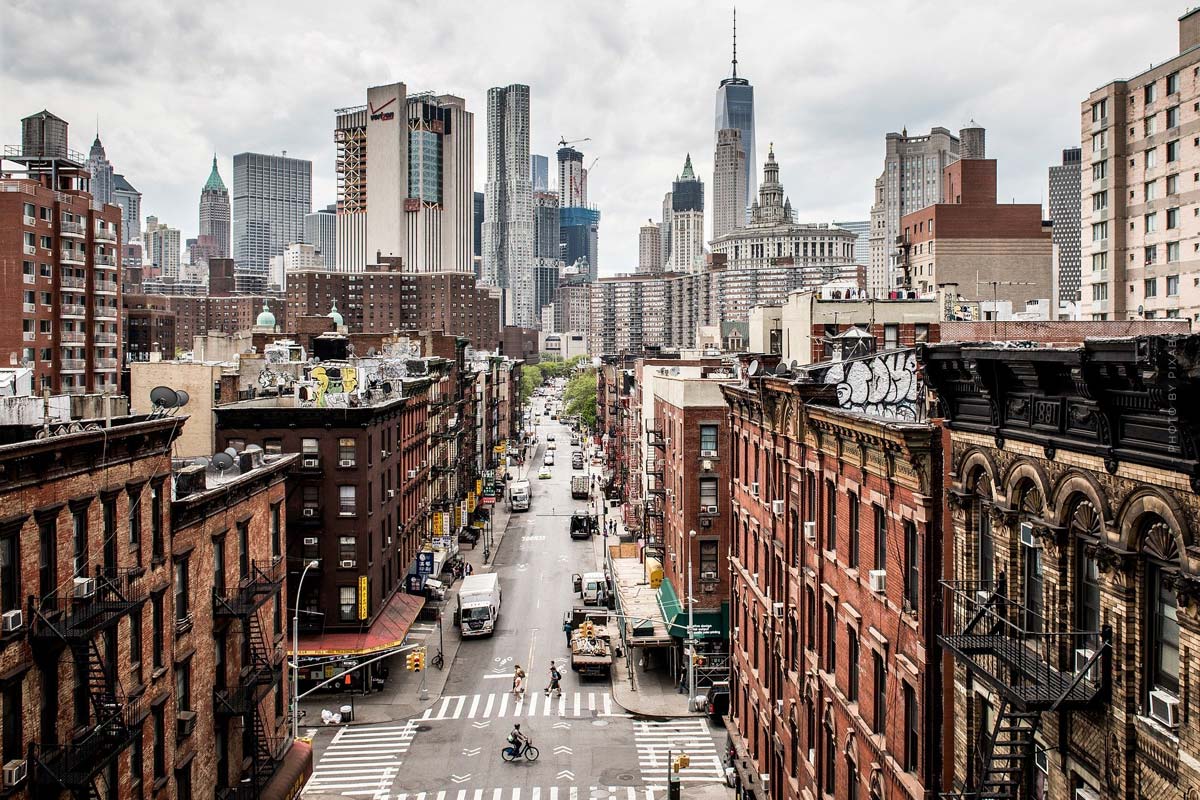 Michael Kors – fashion designer, entrepreneur and interior designer. As one of the most famous people in the fashion industry, you must be wondering how star designer and entrepreneur lives and resides in his New York penthouse, what he likes to read or watch while lying in the big bathtub with his husband in one of his 3 bathrooms? We have the answer here.

His New York apartment is located in Manhattan, more precisely in Greenwich Village, south of Center Park. Together with his husband Lance LePere, he moves into the 500-square-meter penthouse, which is located on a traditional New York skyscraper. He furnished it with his husband and an designer he has worked with in his previous homes and apartments. The result, a modern, minimalist, yet statement-filled apartment.

In this episode of Open Door, iconic fashion designer Michael Kors takes Architectural Digest on a tour of the Greenwich Village apartment he co-owns with husband Lance LePere. The NYC apartment has been fully customized, right down to the hidden sliding doors that allow it to transform from an open, loft-like space to a completely closed-off apartment. What’s more, it’s surrounded by a lush terrace with unobstructed views south to the World Trade Center, west to the Hudson River, and beyond in all directions.

The penthouse is the top floor of the building and is located with the approximately 500 square meters on the roof of the entire house. For Michael Kors taste comes only extra selected things in his four walls. Whether it is a table made of special wood, a handmade vase or a woven basket. His motto, minimalist with different highlights fit the room and their effect. Above all, it is noticeable that a lot of attention was paid to different materials and photography in the design of the apartment. All hallways are decorated with numerous pictures that have emotional as well as material value.

After passing through a small entrance area, you enter the kitchen through a small narrow hallway. The kitchen is overall very simple and clean. The brown-beige kitchen fronts create a pleasant and harmonious color scheme with the white matte countertops. The upper cabinets have light strips mounted from below, which cast soft pleasant light on the worktops, as well as the back wall. The sink and faucet is in a light metal and blends in with the kitchen’s coffee maker. The eye-catchers in this case are a large flowering orchid in a glass vase and a black handmade bowl standing next to it. For a suitably simple and minimalist lighting, short narrow black fluorescent tubes were attached sporadically.

The open dining and does not exclude especially larger celebrations. For parties, events and celebrations of any kind is here enough space for everyone. The dining table is made of white birch wood and is surrounded by 6 designer chairs, made of a contrasting brown orange tone. The highlight here, is a large white crystal in the middle of the table. Divided by a narrow long side table made of an unfinished only cut piece of wood, which stands behind the sofa, is the living room.

The living room has two dark grey facing each other with cushions in the same shade and fabric. With a low, again unfinished wooden table, this is used as a coffee table. Decorated with a large concrete and stone vase and branches with small yellow flowers, the living area uses wood and its structure. Two turquoise armchairs are also to the left of the table. A small oil-powered carmine also creates a romantic mood for the couple from time to time. Behind the carmine, which is embedded in the wall, there is also another small sofa, as well as a shelf with numerous books and magazines on the subject of photography, crime and fashion.

Like the study, the is also located at one corner of the building. Matching the large windows, there is a reading chair and a small table. However, the large spacious bed occupies most of the space here. Decorated with large cozy pillows and blankets, the bed is slightly higher. Opposite the bed there is a huge television set. In order to find peace and quiet, the couple, together with the interior designer, decided not to place more furniture or decorations in the bedroom.

Adjacent to the bedroom, however, is another large walk-in closet. With numerous mirrors, lights and drawers, there is room here for two clothes-loving people. There is room for up to several hundred pieces of clothing, hats, bags, shoes and sunglasses.

The always plays an important role. Here you should come to rest, relax and simply feel good. Thanks to the huge bathtub and the large shower, in which there is room for up to two people, you can also enjoy a romantic evening or two. Naturally decorated in clean colours, the bathroom is covered with large matt white tiles and a grey concrete-like material. With morning and night views from the bathroom window, from which you can also look out while sitting in the bath, it’s a dream apartment.

Extras of the apartment

In a property like this, of course, nothing should be standard. Accordingly, the rooms must also make room for the one or other pompous extra. Whether it’s a study, a gym or a huge terrace with a view of the Manhattan skyline.

Study: Where new ideas are born

The is located next to the kitchen. At the corner of the building are two floor-to-ceiling windows that let in a lot of natural daylight. Thanks to the beautiful view, a narrow long desk was placed here, where Michael and his husband get inspiration and motivation to work. In the middle of the room is a table with a round black wooden top supported by a black marble cone. To seat up to 4 people, four designer chairs made of wood and black leather are symmetrically arranged here.

A large round lamp folded from paper hangs in the middle of the table from the ceiling and provides a soft and pleasant light even in the evening hours. On the left wall of the office, a brown and white wooden cabinet can store everything you need. The shelf is decorated with two wooden vases of different sizes, which are located on the right side. Above the cabinet, there is a television set, which also provides a distraction or two while working. From here you also have the possibility to enter the 75 square meter roof terrace.

In a more than 15 million euros expensive penthouse, of course, the own gym can not be missing. Thanks to a free room, Michael Kors and his husband have brought their own little gym home. Even though the two of them have many differences, they all agree on sports, health and appearance. With togetherness and such a great view of the rooftops of New York, you are still motivated to do sports no matter what time.

Terrace for a piece of nature

The terrace includes on the large of 75 square meters, everything you need as an entrepreneur and designer in a New York penthouse. A BBQ grill, a lounge corner, and a dining table for up to 10 people. That and another huge selection of different plants, spices and flowers makes Michael feel like he’s in the country, or at least in a park. Even though construction noise and city sounds can be heard here at almost any time, you get used to the noises very quickly and a view of the World Trade Center and many other centrally located buildings soon makes up for it.

New York: What you need to know

The United States is best known for its high crime rate. Whether it is drug use, assaults, or fights. But the states also have many different climates and therefore have a wide variety of activity programs. Camping in national parks, going to the movies or the typical American house parties make up for a lot of the negative stuff though. For more information on recreational activities and a ranking of the best rated cities in the world, see below.

As one of the larger cities in the world, the New York City government documents the number of inhabitants since 1750. After industrialization, the first high-rise buildings were also built in New York, which attracted especially the younger people to the city. Due to the possibility to let more people live on the same area, the population increased continuously. 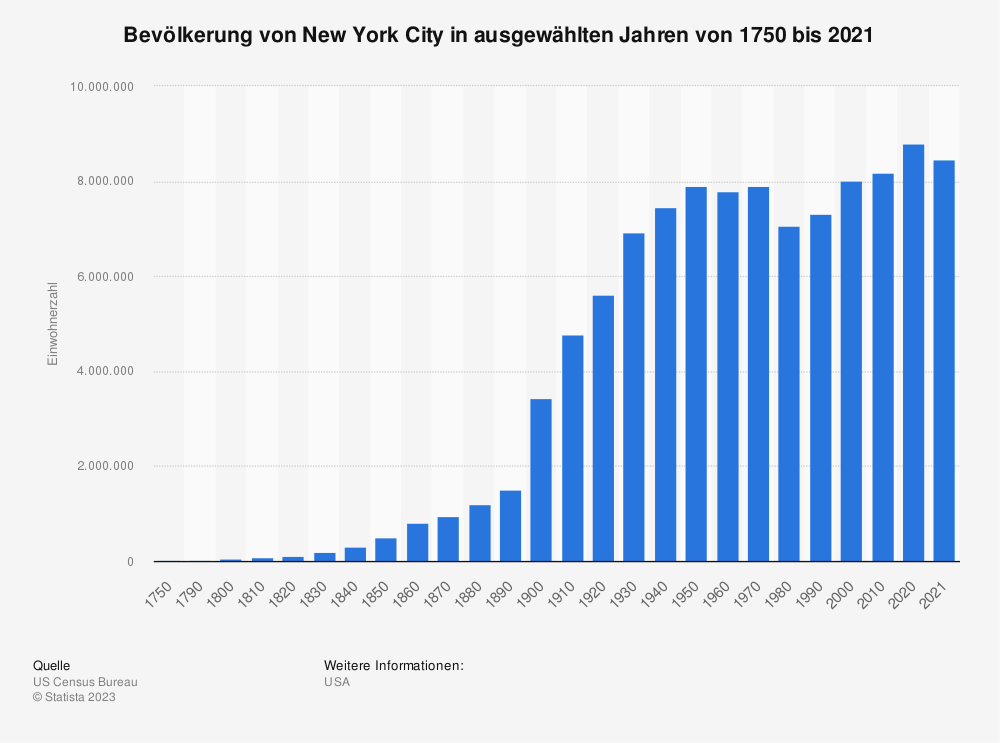 New York, the city that never sleeps. As the metropolis of the USA, it is the largest city in the United States, closely followed by second, third and fourth place Los Angeles, Chicago and Houston. Above all, New York’s infrastructure has been visibly affected by industrialization. During the industrialization, the number of inhabitants and the transport connections increased steadily. Not only the famous New York subway was added, but also numerous high-rise buildings. 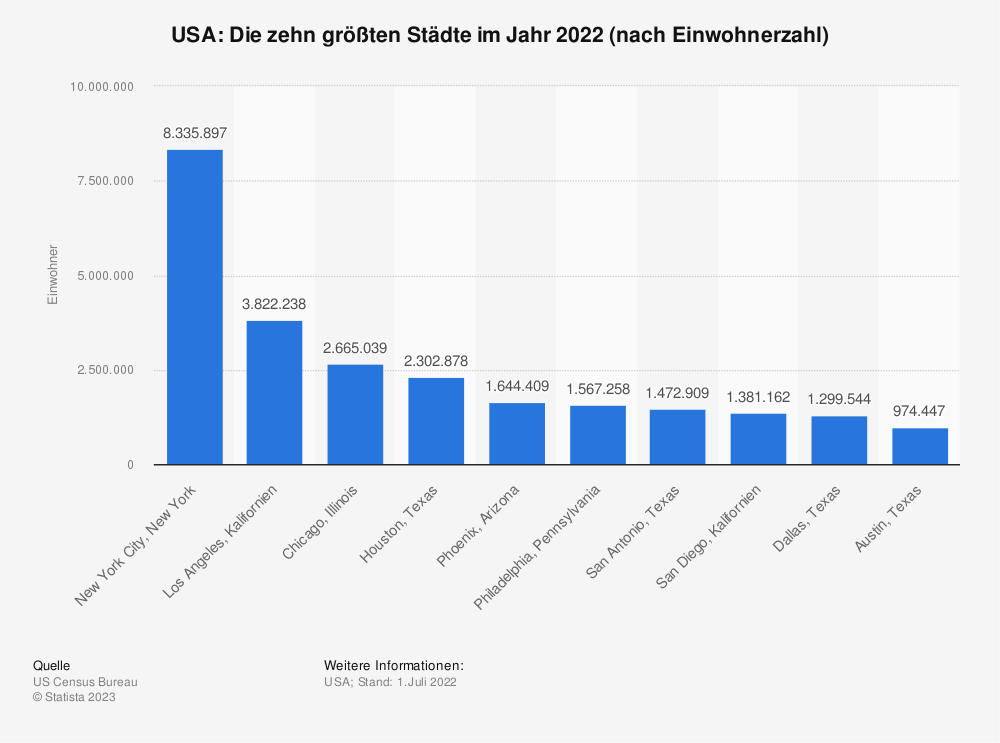 Worldwide ranking of cities with the best rating for leisure activities

Following a worldwide survey on the subject of leisure activities, the statistics shown below were produced. The respondents rated the information good or very good. Although it is hard to believe, place one is the introverted Russian capital Moscow. This is followed by the German capital Berlin. Third place is taken by New York, closely followed by Guangzhou and Mumbai. 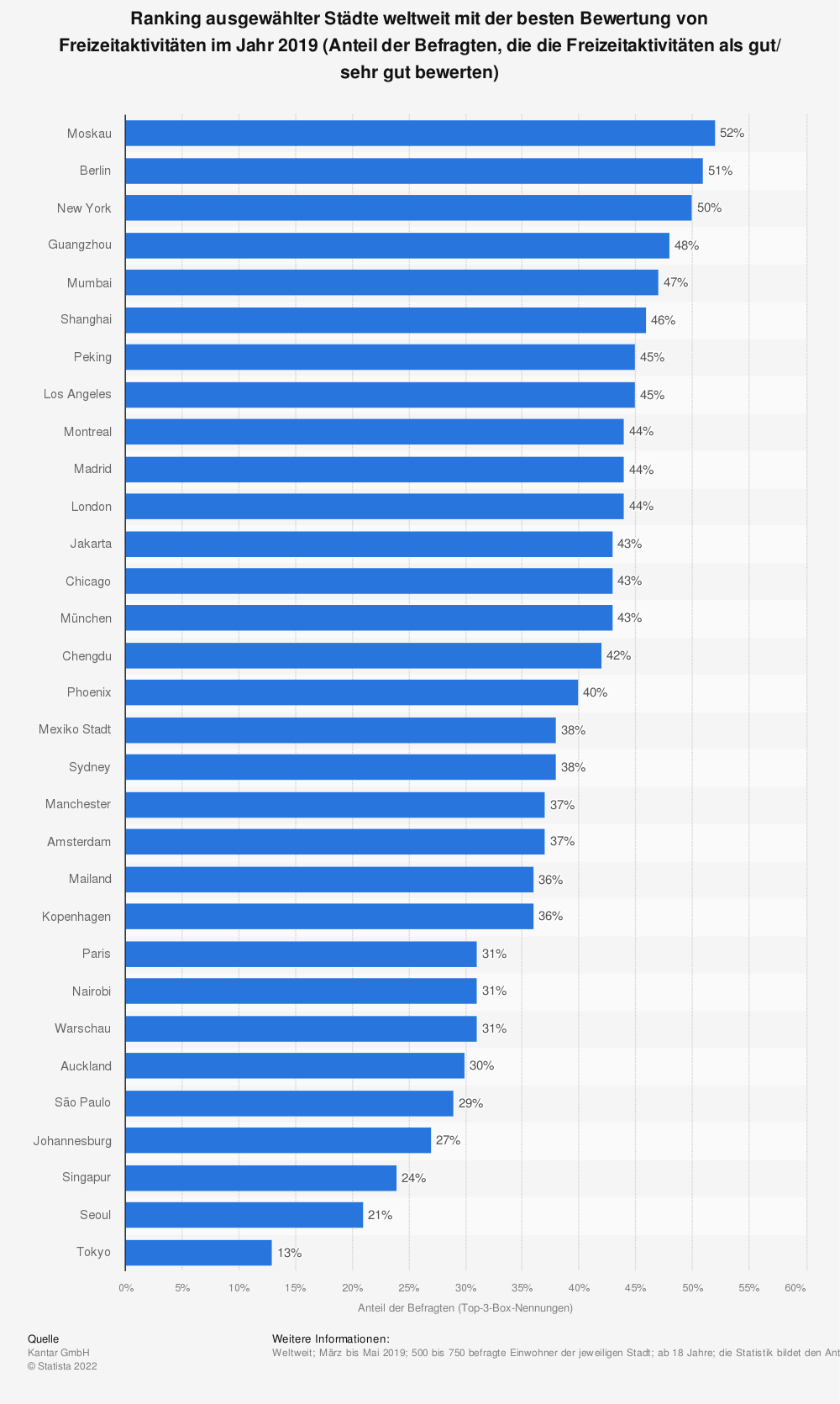