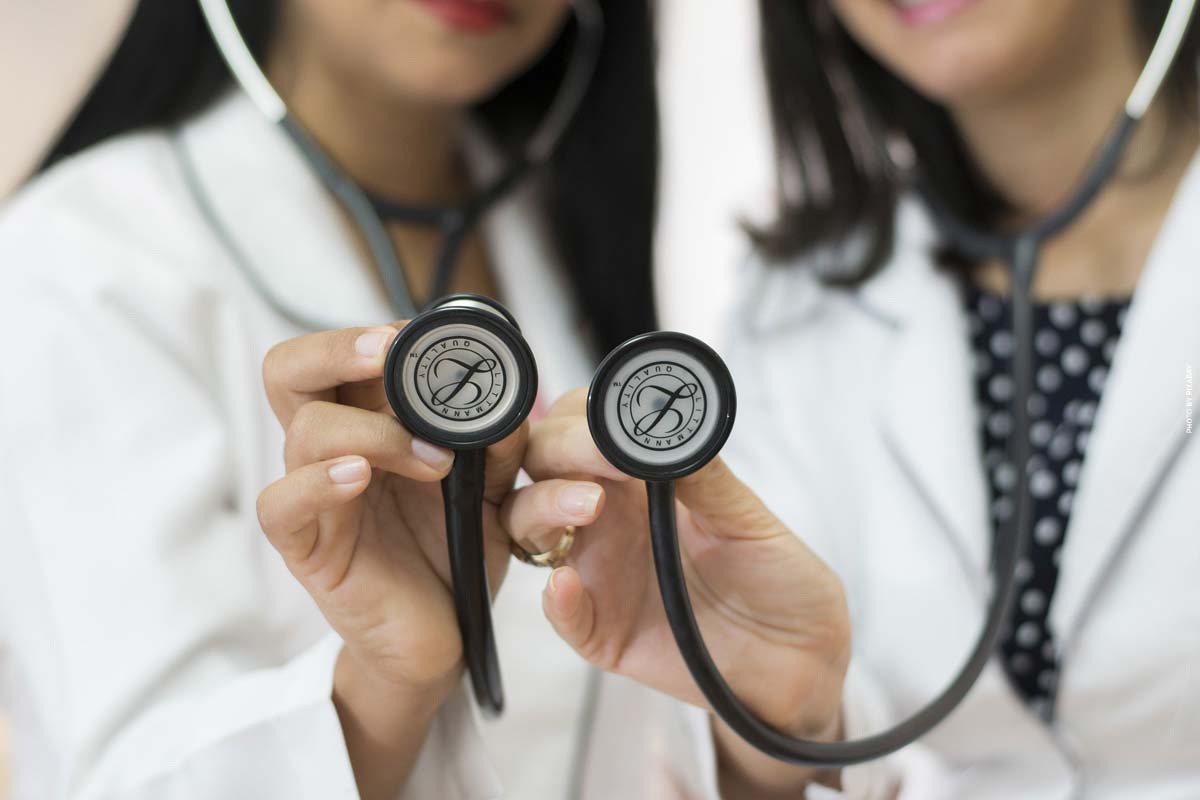 Corona – this virus keeps the whole world in suspense. Since the beginning of the corona crisis, many countries have imposed an entry ban to stop or slow down its spread. As a result, many travel plans for the year 2020 have been shelved. We tell you all about COVID-19, the travel industry before Corona and the effects of the virus on the tourism industry. Travel portals such as TUI, outdoor camping providers such as Campwerk but also airlines such as Lufthansa leave a large part of their fleet on the ground.

The turnover generated by package tours in 2019 will amount to 6,957 million euros and the largest turnover worldwide will be generated in China.

According to Statista, turnover from bookings of package holidays should amount to about EUR 7,123 million in 2020. So far, an increase in turnover from package tours and an increase in holiday trips in general has been observed every year. More and more people decide to see something of the world and put their money aside.

In order to assess the situation, it is necessary to take a look at the travel industry before the Corona crisis. A good example is the travel behaviour in 2019, when more turnover came from package tours than ever before. 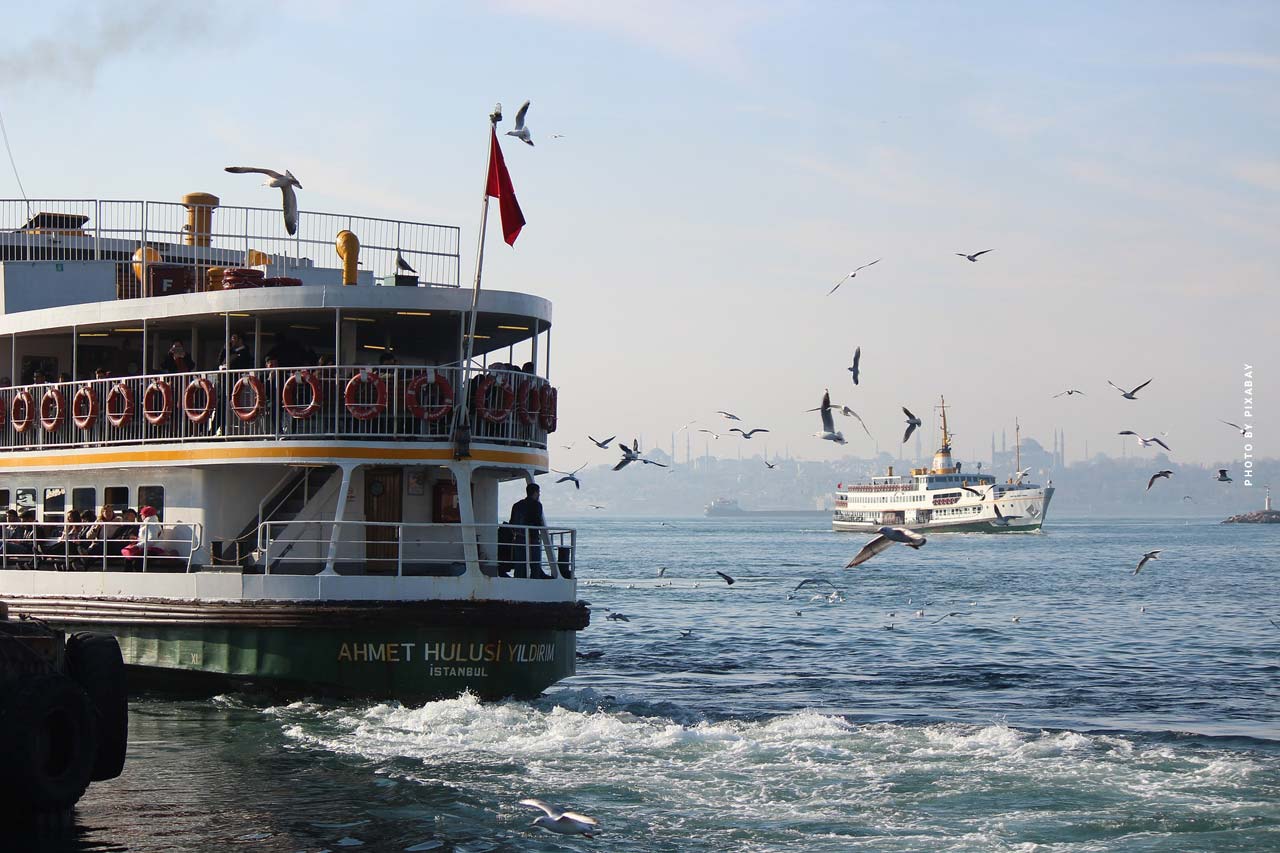 number of holiday trips in the last 10 years

Travel, whether as a package tour or a short weekend trip with your loved one, is becoming increasingly popular. For decades the numbers have been rising and there is no end in sight. Current figures on the slump in bookings under COVID-19 are not yet available. But after the crisis is before the crisis, accordingly the travel industry will quickly regain momentum.

Here you can see the number of holiday trips made by Germans in the years from 2005 to 2019 in millions.

The corona crisis has a strong impact on the tourism industry in 2020, with cancellations and closures, but also a much lower total turnover to be expected. The various providers in the travel industry are assuming the worst.

What are the current effects?

Due to the Corona crisis, many people are currently cancelling their trips and cruises. Many countries have imposed an entry stop, which makes it impossible to fly on holiday despite the corona virus. The waves of cancellations have a strong impact on the tourism industry. Statista estimates that in 2020, the German travel industry will lose about 17% of its turnover and the Italian one about 20%. Another consequence is that the ITB tourism exchange in Berlin will not take place this year. Those who had booked a holiday hope to be able to cancel their trip in order not to be left sitting on the money. Some tour operators offer the possibility to cancel or rebook the trip and therefore have non-stop busy telephone lines. In addition, hotels remain empty for the most part and meetings and reservations are cancelled. Many employees in the tourism industry are laid off or have to expect short-time work. The Irish low-cost airline Ryanair has already cancelled 95% of its flights.

The entry conditions at ports are currently being tightened considerably. As a result, cruise ships are no longer allowed to dock in many ports. Due to the increasing number of cases of COVID-19, Aida Cruises announced on 20.3.2020 that the Aida travel season will be temporarily interrupted until the end of April 2020. Barcelona, one of the most important cruise ports in the Mediterranean, has also closed its port to ships with more than 500 passengers. Many cruise companies are currently making route changes in order to make the voyages possible.

Decreasing rates of the cruise operators

AIDA Cruises is a brand of the British-American cruise company Carnival Corporation & plc for the German-speaking market. Here you can see the current rate with big minus. 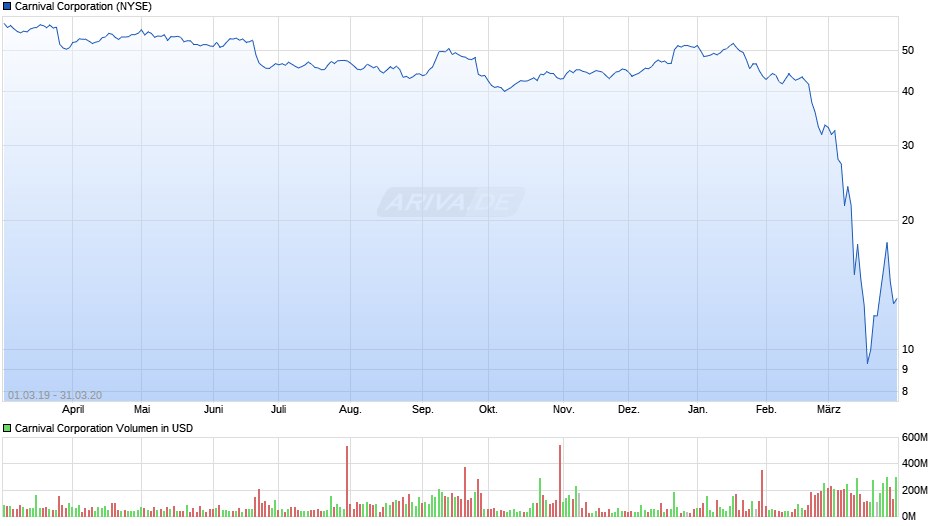 All Disney Parks are closed due to the Corona Virus

All Disney Parks close down first because of the corona virus. Also the Disney ship stays in the harbour for the time being. The Disney reacted to the order of the authorities and tries to slow down or stop the spread of the virus. The Disneyland Hotels will remain open, just like the shops and restaurants in Disney Village. Other amusement parks also had to follow the instructions of the authorities and close, such as Europa-Park. Since amusement parks can accommodate more than 1000 people, it makes sense and is safer to leave them closed for the time being.

Statistics: Consequences of the Corona Virus for international tourism 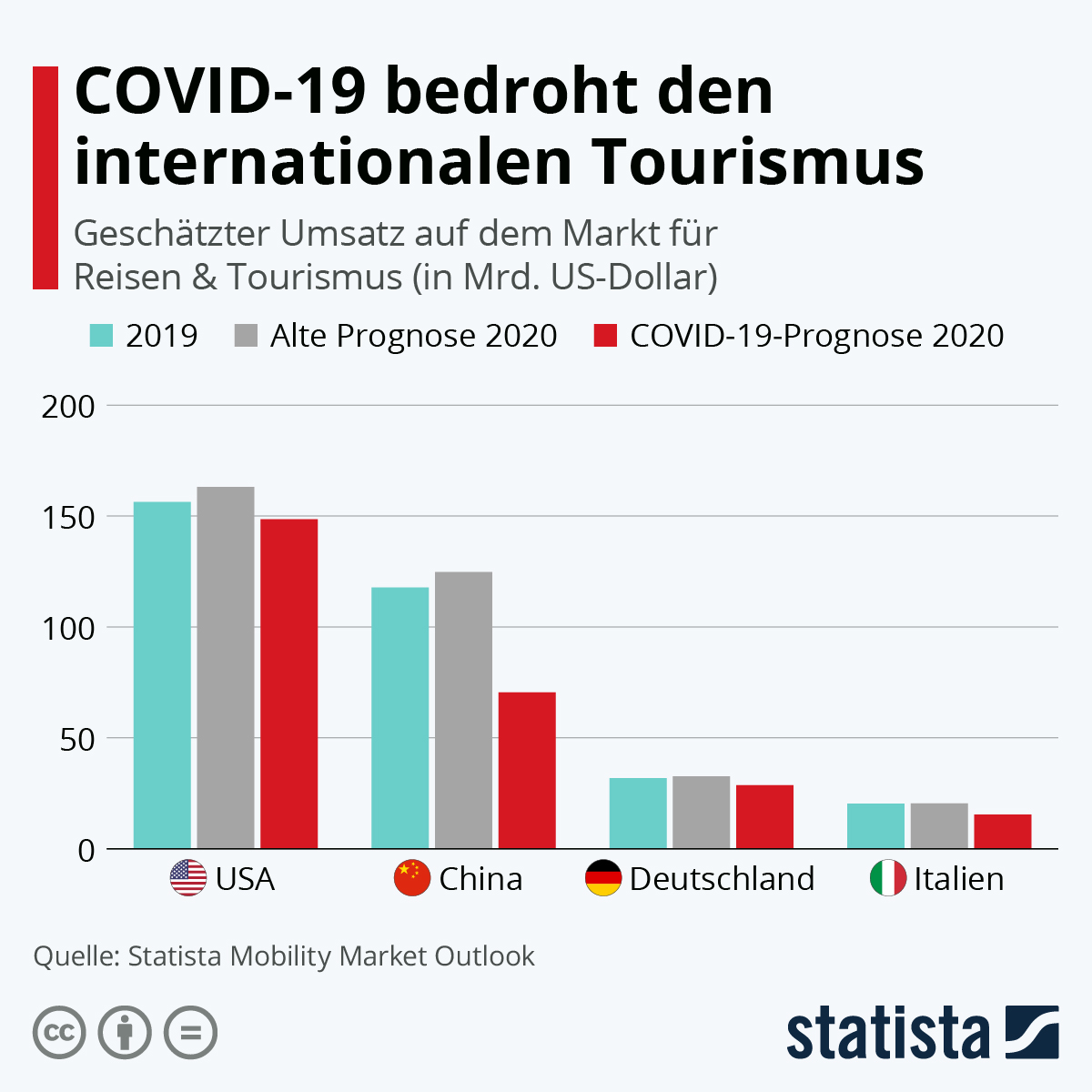 The Corona virus is in all news at the moment – it will be hard to distinguish real information from fake news. That’s why we have summarized the most important information for you, so that you know where the virus comes from, how it spreads, what complaints the infected people have and how you can protect yourself from the virus. 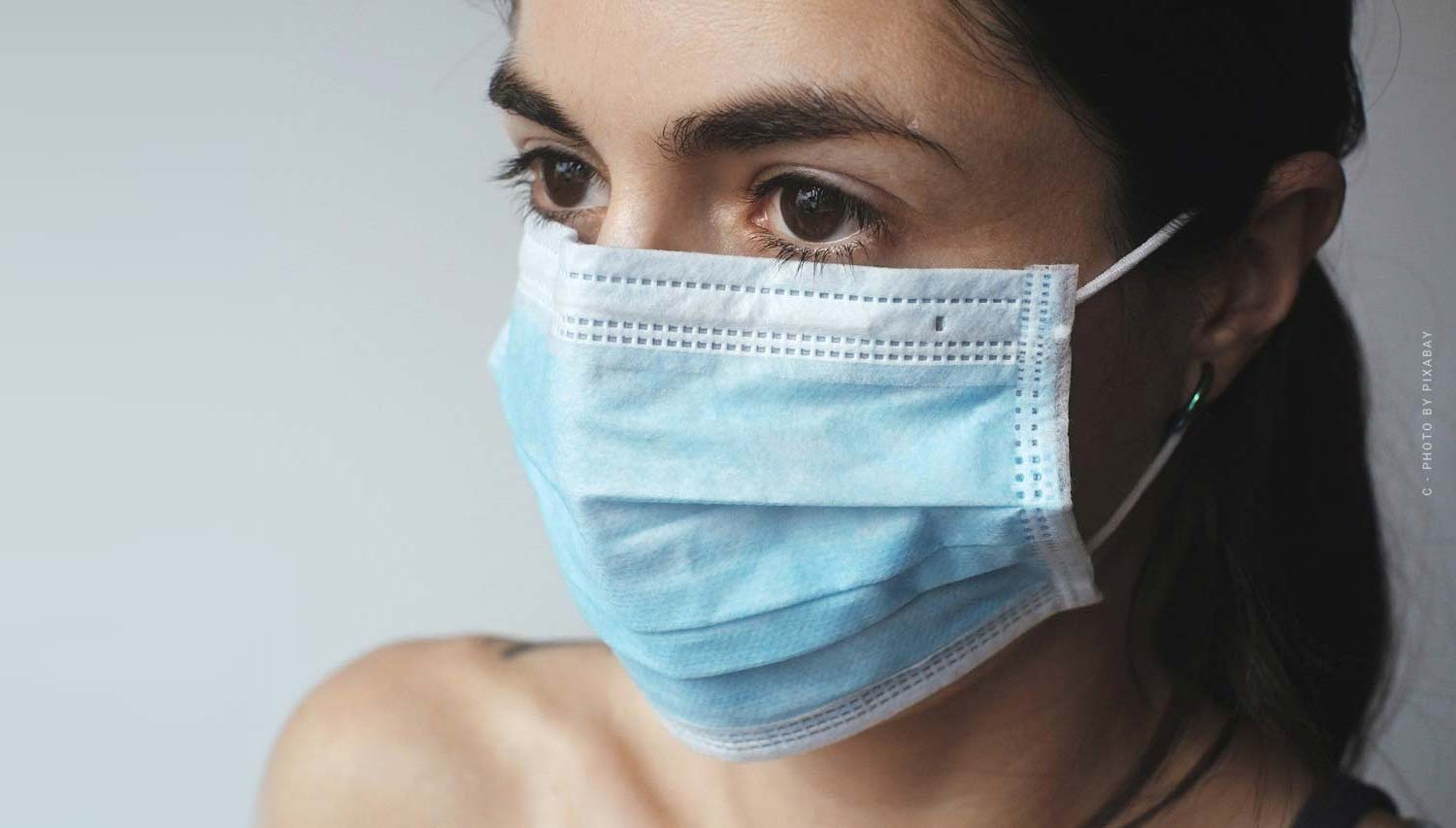 Origin of the virus

Where does the coronavirus come from and how did it spread? COVID-19 (the official name) originated in the Huanan Seafood wholesale market. This wholesale market mainly deals with seafood and wild animals. The market is located in the middle of Wuhan, China. The exact origin is still unclear, but we know that it is a novel virus, which is 80% identical to the SARS corona virus. The virus is transmitted from person to person and an infection is also possible during the incubation period.

The symptoms of the corona virus are very similar to the symptoms of flu or even a harmless cold. At least 80% of the diseases progress with mild to moderate symptoms. Others often show the typical signs of viral pneumonia – such as fever, cough, shortness of breath, breathing difficulties, muscle pain and fatigue. Rarely, patients also experience headaches or sputum. The risk group for which COVID-19 is dangerous are elderly or pre-sick people. In these cases, the corona virus can also lead to death.

Protection against the corona virus

To protect yourself from the COVID-19 virus, there are some precautions you should take. In recent weeks the corona situation has worsened, which is why it is so important to avoid crowds. The house should only be left when absolutely necessary. In order to avoid leaving unnecessarily, most shops have already closed their branches. Of course you still have to go shopping and to the pharmacy if necessary. When you leave the house, you should be careful not to touch your face, not to shake hands and to keep a certain distance from other people. One should cough and sneeze in the crook of one’s arm and not in the hand. You should also try to touch as few surfaces as possible, for example by pressing the elevator buttons with your ankle and not with your fingertip. When you get home you should wash your hands immediately, definitely with soap and for at least 20 seconds. Those who still got some disinfectant before it was sold out everywhere should also disinfect their hands outside in between. You should also air the rooms at home regularly and strengthen your immune system.