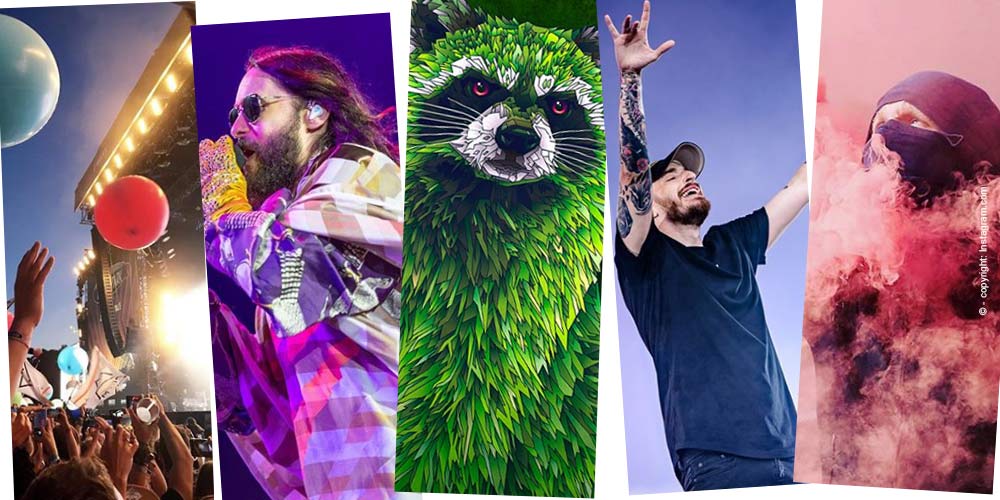 Music offers us a huge spectrum of emotions and unforgettable moments, from the most heartbreaking ballads to the hardest rock songs, everyone has one or more genres to which they have a strong bond. Rock am Ring and Hurricane are two especially big festivals that catch this diversity incredibly well. In the past years rock giants like Asking Alexandria but also newcomers Pvris from Amerkia were there with quieter songs. FIV was there for you and gives you a recap about the rock events of the year.

The Twin Festival – Rock im Park and Rock am Ring

Rock am Ring were supposed to celebrate their debut in 1980, but nothing came of it. Tickets were sold, flyers printed and bands booked. The event failed because there was no parking for the visitors and the residents demonstrated to make their parking spaces available for strangers. But the organizers did not give up, so that the festival was finally realized in 1985. Rock am Ring was supposed to be a unique event, but nobody could have guessed that 75.000 visitors from all over the world came, so the unique Rock am Ring became an annual event.

The success of Rock am Ring became no less over the years, on the contrary. The festival became better known and internationally the biggest acts of the scene came to Germany to shake the earth once a year. The growing demand was the basis for the debut of the twin festival “Rock im Park”. In the middle of Nuremberg, the new festival enjoyed the same popularity as Rock am Ring. The two festivals still share the line-up and attract up to 80,000 people every year.

Highlights of RaR and RiP

The two festivals had some exciting acts over the last years. Among the highlights were definitely top acts like the dead pants, Linkin Park, Rammstein or Marylin Manson. These are acts that have made a special name for themselves in the industry over the years and that such artists perform at a festival here in Germany, says a lot. Not for nothing are these festivals one of the biggest rock festivals on earth. But not only rock giants have inspired the crowd. Last year, acts like Alma or Gorillaz were on the outskirts as well and provided variety. Every year RaR and RiP surprise with new exciting artists.

With such diversity comes corresponding costs. When the festival first came out you had to pay 50€ per ticket, but you only had a line-up of 13 bands. Meanwhile it is partly over 90, therefore the price has also risen to currently 169€. Then you have the entry for 3 days festival pure – but then there is also the camping ticket, which is 50€ again. So you have a total amount of 219€. In December the price for the weekend tickets rises to the 3 price level which was about 239€ last year. If you want to have an all-round experience without worrying about things, you can also buy the VIP full package for a proud price of 999€.

VIP Camping instead of Green Camping

The traditional green camping is the cheapest option, for 50€ you get access to the campsite, pitch your tent and build a small camp with your friends. If you want to have a more relaxing experience, with as little effort as possible there is also a VIP option, the Experience Camping Ticket for 349€.

A hurricane to music

The Hurricane Festival has existed since 1997 and since then has taken place annually at the Eichenring Motorcycle Sandrennbahn near Scheeßel in Lower Saxony. The rush of visitors is almost as big as at Rock am Ring and Rock im Park. With around 70,000 visits last year, it is also one of the largest festivals in the country. Like Rock im Park, they play a colourful mix of rock, pop, metal and some rap. Acts like Prinz Pi, Marteria, Die toten Hosen, Foo Fighters and more inspire the crowd and provide a lot of variety.

It rocks in the heath – that’s how the Hurricane Festival

On the 8th and 9th of September 1973 the very first Rock Festival took place in Scheeßel under the title “Es rockt in der Heide”. The festival attracted many rock greats like Chuck Berry, Jerry Lee Lewis, Chicago, Manfred Mann’s Earth Band and Lou Reed. After another festival took place in Scheeßel in 1977, where the organizer noticed that he could not pay the bands and a total material damage of 1.5 million marks occurred, it became quiet again in Scheeßel. But only until 1997, when the new mayor took care to introduce the Hurricane Festival. Since then the Hurricane has been a musical tradition of the town, which with the help of a local entrepreneur Folkert Koppmans managed to convince the Scheeßel town council. The first festival with headliners such as Rammstein, INXS and Bad Religion attracted around 20,000 visitors.

When only 36 bands played at the first festival you could get a ticket for 59DM. Today all this is a bit cheaper, the cheapest price category starts at 149€, but you also have more than 100Acts! There’s a totally fair price, considering you’re getting a whole weekend party put. At the moment the third price level is active, so a 3-day ticket costs 179€.

Similar to Rock am Ring and Rock im Park in the VIP area, Hurricane Festival features the Platinum Lounge. Such a platinum ticket costs you 579€ in the 3rd price level for 3 days. The advantages of such a ticket are really special and offer you a rather luxurious festival experience.

Another ticket option for you is the club ticket, which you can book in addition to the platinum ticket.

Apart from camping you also have the possibility to rent a hotel room at “Resort Wolfsrudel”. The “Resort Ruf der Eule” is an already established campsite, where you don’t have to bring your own camping gear, which saves you a lot of work. The Resort Ruf der Eile costs you 319€ in the third price level.

So we arrived in our Resort at the Hurricane Festival. Weather was Not always as it looks in the pic. Too much Wind and lots of rain. Today Looks much better! ??? #hurricanefestival #hurricane2017 #scheeßel #festivaltime #festivallover #picoftheday #hurricaneresort #hurricaneswimteam #camping #beautifulnature #enjoylife #sundowner