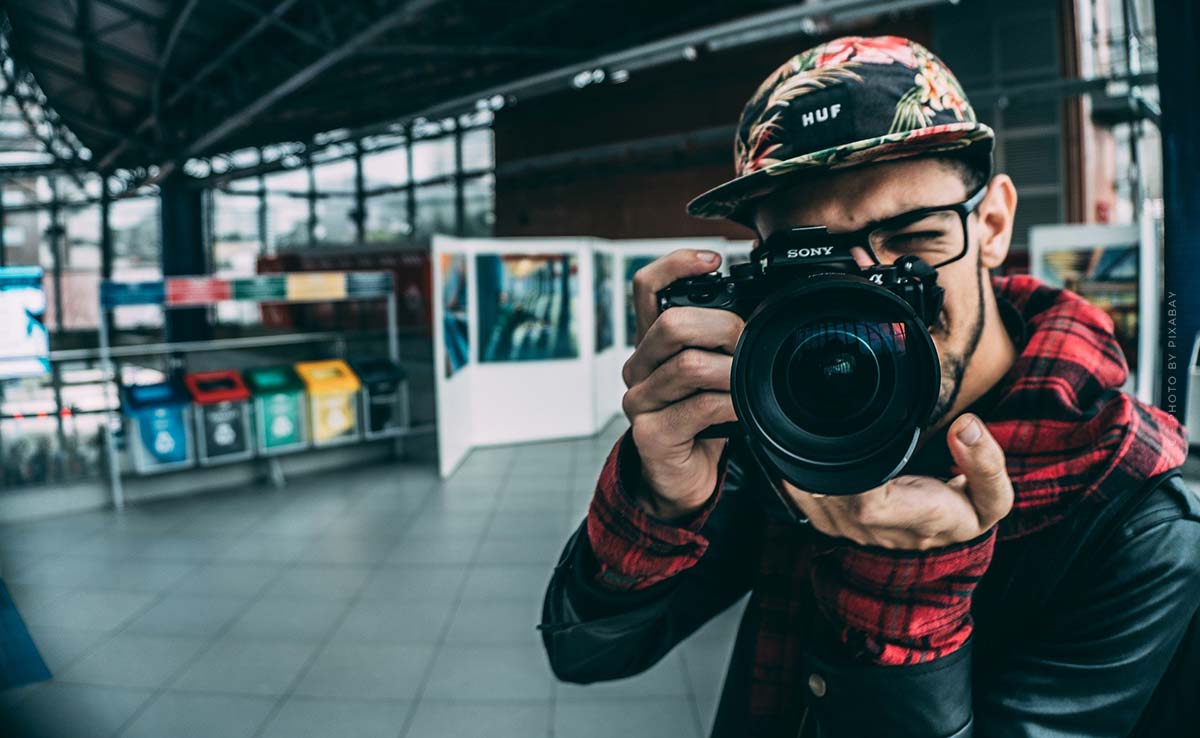 Overview
1 Internet giant YouTube: That’s how blatant the numbers are.
2 Largest YouTube channels of all times
2.1 Largest Channels on YouTube – Video
2.2 T-Series: A Legend of Bollywood
2.3 PewDiePie – A young Swede writes internet history
2.4 5-Minute Crafts: The all-rounder of the YouTube sphere
3 The professional YouTuber – facts and figures
3.1 Statistics on revenue: This is how rich the stars really are
3.2 Do you know?

Internet giant YouTube: That’s how blatant the numbers are.

Originally launched in 2005, YouTube is now the largest free platform for videos online. These are created, uploaded and shared by users. Users also have the opportunity to rate and comment on them. In the meantime, the Californian company has become a trillion dollar global player that not only influences the current generation, but also those who will follow ours.

YouTube has revolutionized the Internet. Never before in the history of the Internet has there been a platform that enabled its users to configure a monthly income through brand deals and advertising revenues.

If you have never dealt with the world of YouTube madness, you might find these statistics interesting:

So with these numbers it’s no wonder that each one of us at least once in our lives is drawn into the colorful world of YouTube videos. However, if you think it’s easy to become a content creator, you obviously haven’t dealt with the biggest YouTubers in the world yet. With the growing popularity of the online portal, the competition is also increasing. And the road to the first one million subscribers is often rocky – only those who show staying power will make it into the ranks of YouTube icons.

Tip! Find out how you too can become the new star of the YouTube universe at the end of this article! 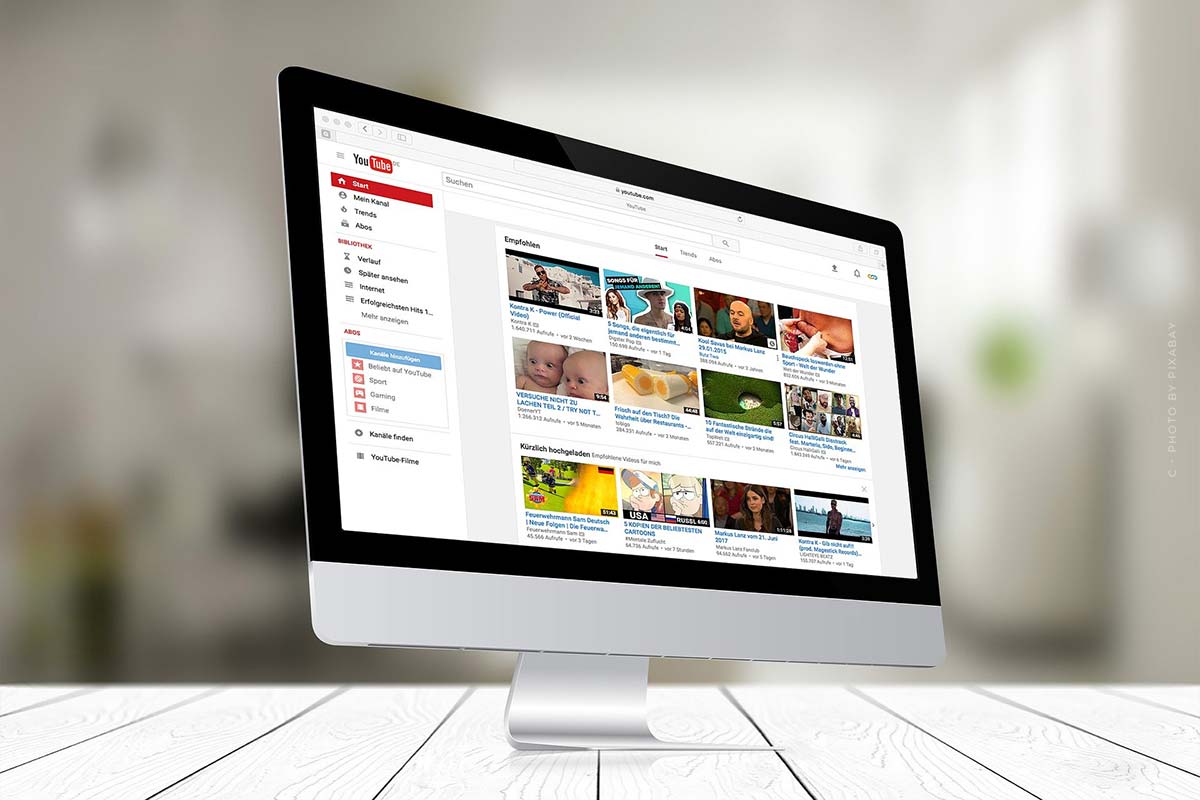 The YouTube landscape is subject to constant change. And as colourful as our world outside is, so is the shrill world of video icons. From music to comedy, there’s plenty to be found in the Top 10 most-subscribed YouTube channels of all time:

The number of those who one day want to use YouTube to collect their monthly paychecks is increasing every day. But there are a handful of YouTubers who have managed to build up and maintain their fanbase in recent years despite tough competition. After this video we will explain how many of them have managed to do so. We’ll also tell you about the biggest online competition between two YouTube rivals ever!

Around the world the South Korean Gangnam Style is danced and the American Liza Koshy has been making people laugh with her Dollar Store Comedy for ages. The dream job of “professional YouTubers” has since also found its way into the rooms of adolescent teenagers. But who are these great YouTube icons we always talk about?

Check out the most popular YoutTube channels from 2012-2019 here:

T-Series: A Legend of Bollywood

Contrary to what some would expect, the biggest YouTube channel of all time has nothing to do with online games, make-up or pranks á la Logan Paul. With a total of 138 million subscribers and lots of charm from faraway Bollywood, T-Series tops our list. The YouTube Channel of India’s most successful music label quickly became a multi-channel network and now has 29 channels. The label’s main channel mainly publishes music videos as well as movie trailers of Indian films. Thus, most of the videos are in Hindi, although sometimes English, Portuguese and Spanish translations are also available. Since 2017, the YouTube channel T-Series also holds the title of the most respected channel of all time.

Quick Facts: Never before have there been so many subscribers

With nearly a billion views, Guru Randhawa’s indie pop song is the most respected and popular video on the channel:

Largest music label in India: From fruit seller to millionaire

The history of T-Series started rather small – with a big dream, a long breath and lots of pirate copies.

The second YouTube channel on our list called ‘PewDiePie’ was created by the Swede Felix Kjellberg. Here he posted since 2010 mainly Let’s Play videos of horror and action games. It took only two years and PewDiePie reached 1 million subscribers. Shortly after that he also started posting vlogs and short comedy clips. It only took another twelve months and in 2013 PewDiePie officially became the biggest YouTube channel of all time. He kept it until early 2019 when the aforementioned Indian record label came dangerously close to its throne as the most popular YouTube channel.

This finally overtook him and after almost 7 years PewDiePie aka Felix Kjielberg became the second most popular YouTube Channel with 104 million subscribers. Nevertheless, this did not have a negative effect on the success of the Swedish channel. Quite the opposite: in 2020, it continues to rank as one of the most viewed YouTube channels of all time. Thanks to his long-standing popularity and extensive coverage of his person, he has become one of the most famous online personalities of the 21st century and has even been named one of the 100 most influential people in the world by the renowned Time Magazine.

Quick Facts: Funny name with a lot of impact

With 250 million views, PewDiePies Dissrap called “Bitch Lasagna” is the most viewed video on his channel. This was created during the competition between him and the YouTube Channel T-Series. An online contest that we’ll explain in more detail below:

The competition with T-Series

As we all know, the YouTube world not only loves a lot of glitter, but also just as much Gossip. And this is where PewDiePie and T-Series poured a lot of oil on the fire when it came to the most blatant showdown in Internet history.

Our third channel in the bunch and therefore also the most popular DIY channel in history YouTubes is 5-Minute Crafts. The videos are mostly compilations of individual videos in the area of craft and life hacks. Easy to explain and descriptively designed they are mostly in how-to formats and sometimes also involve scientific experiments. The channel is part of a multi-channel network called “Channel Frederator”.

The name is slightly misleading, as most videos go far beyond the 5-minute mark. Nevertheless, the channel enjoys great popularity. Just one year after the channel was founded, its founders Pavel Radaev and Mara Mukhametov broke the 4 million subscriber mark. Further records were set in December 2018, when the channel was accessed more than 238 million times during just one week.

Since finance is part of every adult’s life, it is no wonder that the 42 tips and tricks on saving are the channel’s most popular video:

The well-known YouTube channel belongs to the company TheSoul Publishing, also founded by Pavel Radaev and Marat Mukhametov. Originally, the Cyprus-based company was involved in the creation of social media content and operates successful sites such as AdMe.ru and BridghtSide.me. The success of the YouTube channel 5-Minute Crafts finally rounded off the success of the new media company. Other successful channels that TheSoul Publishing has built are Bright Side, 7-Second Riddles, Actually Happened and Doodland.

The professional YouTuber – facts and figures

So as our list of the biggest YouTube channels of all time shows: the road to becoming a YouTube star is different. In general, however, it is always worth knowing the exact facts and figures about the YouTube medium. Who uses the platform at all? How often do people actually watch YouTube? And how much do they actually earn?

Here are the most important statistics the YouTuber of tomorrow needs to know:

When YouTubes was founded in 2005, there was no fixed target group. Only one thing the founders knew: a platform that allows someone to give free rein to their creativity in this way is long overdue. Almost everyone who statistically has an Internet connection has been there at least once. You do not believe us?

Then take a look at these numbers:

Here you can also see which countries watch YouTube the most. Anyone surprised? 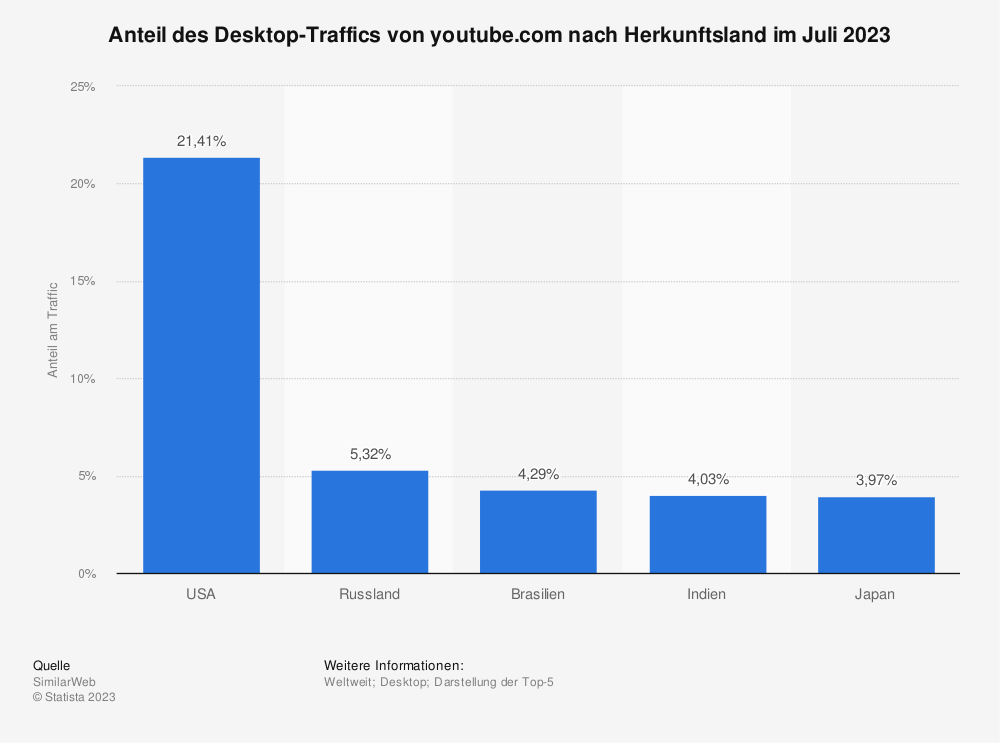 Statistics on revenue: This is how rich the stars really are

Even if it may quickly appear so, only a fraction of all channels that are on YouTube are monetized. However, the number of channels earning six-figure sums on YouTube each year is growing by 40% each year. Since YouTube introduced GoogleAdSense, any content creator with more than 1000 subscribers and more than 4000 hours of usage in the last 12 months can unlock GoogleAdSense and start making money. However, there are many more ways to achieve the goal of the YouTube icon. These include the sale of merchandise, sponsorships, crowd and fanfunding.

We have summarized more statistics on the topic of revenue for you:

More tips about YouTuber will be and revenue, has also YouTube star Patricia Bright summarized here:

So YouTube has not only revolutionized our leisure activities, but also the job market, Hollywood and entire industries. How long the most popular YouTube channels of all time will stay on their seats is only a question of time. In the virtual world of diss tracks and make-up brushes, one trend after another is constantly being born. The fact is: never boring in the YouTube sphere.