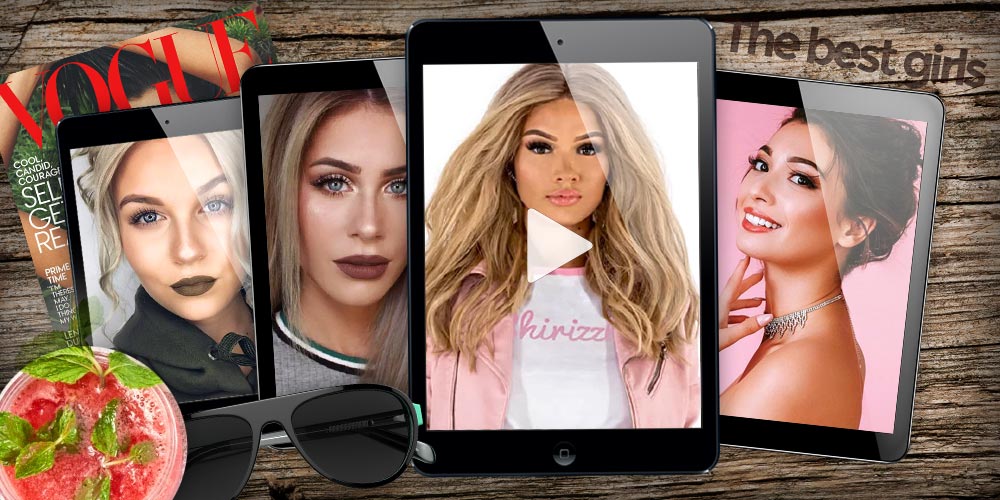 Youtube is no longer a foreign word. With millions of viewers and web video producers, it’s easy to get lost in the shuffle. If you are looking for inspiration for new Youtubers, then this is the right page for you. We present you our Youtube highlights and maybe you will find the perfect channel for you. Whether it’s pranks, hauls, beauty tutorials, comedy or vlogs here is the right Youtuber for everyone. Check out all the Youtuber from A-Z here or directly the top 100 Youtube stars in Germany.

Here you can find out which Youtubers you absolutely have to watch. Want to start blogging yourself? From cameras to continuous lighting and memory cards, here’s how to set up your Youtube studio.

Behind BibisBeautyPalace is the 24-year-old Cologne native Bianca “Bibi” Heinicke (* 6 February 1993 in Cologne). For most people, her name is no longer a foreign word, because she is one of the most successful web video producers in Germany and has already won prizes such as the ‘Playaward 2014′ of the Videodays in the category Beauty, Lifestyle, Fashion. She founded her channel at the end of 2012, starting with the topics of fashion, cosmetics and lifestyle. Her videos became really successful through her ’10 kinds of…’ Parodies with her Youtube partner and friend Julienco. Today, Bibi is one of the 5 most subscribed channels in the German-speaking world.

The 22-year-old Dagi Bee is also one of the most successful Youtubers in Germany. Her real name is Dagmara Nicole Ochmanczyk and she was born on September 21, 1994 in Düsseldorf. She became known with Youtube colleague Liont, with whom she was in a relationship from 2011 to 2015. In September 2014, Dagi Bee cracked the million subscribers on Youtube, making her the 20th most successful German YouTube channel. She has also won awards such as the ‘Nickelodeon Kids’ Choice Award 2015/2016′ in the category Favorite Video Blogger: Germany, Austria & Switzerland. Through her YouTube success, she has even been able to pick up the odd guest role in films and music videos. In 2015, she starred in the feature film Kartoffelsalat – Nicht fragen! and was the lead in KC Rebell’s music video Bist du real. After breaking up with her Youtube colleague Liont in 2015, the film editor of the German hip-hop independent label Banger Musik, Eugen Kazakov, won her heart in the summer of 2015.

Katja Krasavic is probably the most provocative Youtuber in Germany. With videos like ‘Fans rate naked pictures of me’ or ’10 ways to kiss’ she regularly causes a furore on the net.
The just 20-year-old has to take a lot of criticism every day, but that doesn’t stop her from producing new videos for her almost 900,000 followers every week. Fans love the Leipzigerin especially for their open approach to sexuality.

Melina Sophie and her (now) eponymous channel have been a staple of the YouTube community for years. She founded her channel in October 2013 under the name ‘LifeWithMelina’. She was born on 13 September 1995 in Minden and is actually called Melina Sophie Baumann. She got her Youtube breakthrough through Youtuber Liont. At the end of 2015, she moved into a shared flat in Cologne with fellow Youtuber Shirin David. In the meantime, however, she lives in her house in Iceland.

The 24-year-old Mrs. Bella is one of the most successful beauty Youtubers in Germany. Isabella, as she is actually called, was born on October 24, 1992 and trained as a makeup artist and hairdresser. What few people know is that she landed on the video platform thanks to her friend and Youtuber Dagi Bee. Dagi Bee met the pretty blonde at a party and immediately recognized her talent. It’s a good thing she listened to Dagi Bee back then, because today she even sells her own eyeshadow palette and is very successful on social networks.

The German Youtube star and beauty guru Maren Wolf has been active on the successful video platform since 2010. She became known for her beauty tutorials, diet tips and challenges. The Youtuber’s real name is Maren Merkel and she was born on May 6, 1992. After her wedding in mid-2017, she took the name of her boyfriend Tobias Wolf. Together with her husband, she regularly produces new content for her followers on her main channel and the side channel TheDailyWolfs, on which she puts new vlogs online every day.

The likeable blogger and Youtuber Kisu lives in Berlin Mitte since 2016. Together with her sister Mai she runs the blog “sistersloft”, on which Mai does the editorial work so that her sister can focus on her main activity Youtube. I spoke to her about family, travel and of course fashion. Read the here!

The pretty 18 year old Jasmin Azizam from Cologne has been running her Youtube channel since the end of 2015, where she regularly uploads videos on the topics of fashion, beauty and lifestyle. We talked to her about her private life, her Youtube channel and her winter trends 2017. Read the here!

Nilam Farooq became known through her channel ‘daaruum’, which she has since changed to her name. The Berlin native was born on September 26, 1989. However, she did not become known through Youtube, but through her acting. Since 2006 she can be seen in many TV and cinema productions, such as SOKO Leipzig. Her channel is one of the 100 most subscribed German-language channels.

Paola Maria Koslowski, who became known with the channel “Paola’s Welt” and her beauty tips, is now one of the beauty gurus on Youtube. Since 2013, she has been together with colleague Sascha from the Aussenseitern and has even been married since the beginning of 2017. Paola and her husband live together in Cologne and regularly produce new videos such as ‘Sister vs. fiancé’ or ‘My husband guesses prices of beauty products’. At the end of 2014, she and Sascha founded the joint channel ‘DieBibs’, on which the two regularly publish vlogs.

The 26-year-old Berlin-based Jasmin, better known as TamTam, is successful with her fashion, beauty and lifestyle videos on Youtube. From drugstore hauls to fashion lookbooks and travel vlogs, her channel has it all.

With over 150,000 subscribers, 21-year-old Tiny Tina from Düsseldorf is now really successful on the video platform. The impetus for her first YouTube video was given to her by none other than Dagi Bee. On her channel she offers her fans entertainment videos of all kinds.

xLaeta is actually Julia Maria and is 20 years old. On her channel you can find mainly beauty and lifestyle videos, which the beautiful blonde puts online every Monday, Tuesday and Friday. Besides her Youtube career, the beautiful Julia is a busy student. She founded her channel in early 2013, and it is in the top 100 most subscribed channels in Germany. Besides Youtube, she also published her own online magazine ‘Xlaeta’ and her own app.

Shirin David was born on April 11, 1995 in Hamburg and her real name is Barbara Shirin Davidavicius. She is probably one of the most famous Youtubers and social media stars in the German-speaking world. On her channel you can find everything from beauty to comedy and lifestyle. That she is not only a talented web video producer but can also sing, she proved together with Ado Kojo and the song Du liebst mich nicht. Shirin is not only active online, she is also no longer an unknown face on TV, because in 2017 she is a juror in the 14th season of Deutschland sucht den Superstar.

Anna Maria Damm actually became known through the 8th season of the show Germany’s Next Topmodel, where she even reached the 5th place. After the show she decided to pursue a social media career. On her channel she gives her followers beauty tips and presents herself very self-confident. No matter if acne or dry skin, in front of her fans Anna Maria shows her most natural side. On her vlog channel‘AnKat‘, which she runs together with her sister Katharina Damm, she allows a deep insight into her private life.

Lamiya Slimani was born on 17.07.1987 in Stuttgart and is a beauty & lifestyle web video producer. She also regularly shares tips about a healthier lifestyle on her channel. She is not the only known family member, her siblings Sami and Dounia Slimani are also well-known web faces.

Many know her. Saskia became known through her beauty and lifestyle channels on YouTube and Instagram. In the past she was more active in the beauty sector and today many of her videos revolve around her family. The young mum already has a little son and is now expecting twins. She has already renamed her channel “Saskia’s Family Blog”.

– Laura Isabella Yilmaz is also a successful YouTuber who started her career in the beauty sector. Meanwhile, she leads a life together with her husband and her children. For many years she lived with her family in Turkey. At the moment they are considering whether to continue their life in Turkey or in Munich. It remains exciting in any case. If you are interested in family vlogs, beauty tips and pranks, then her channel is the right place for you.