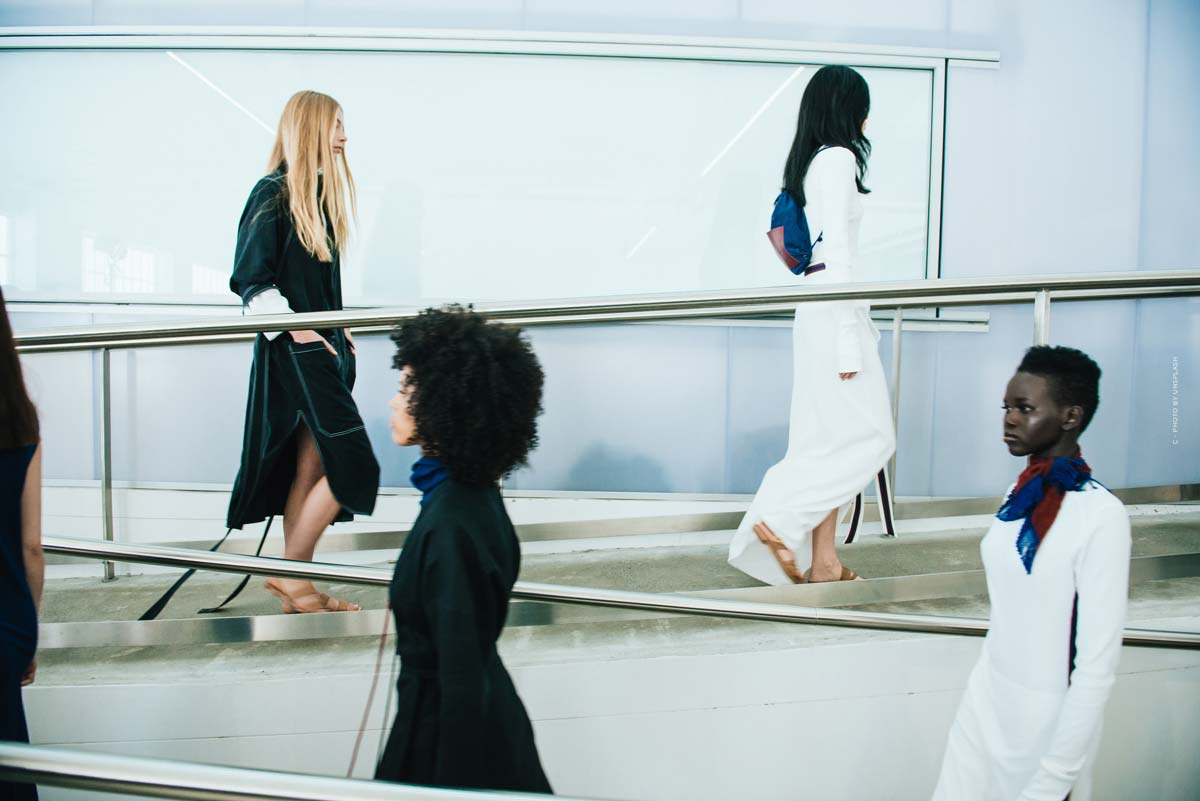 The former German supermodel Nadja Auermann was considered one of the most famous German models alongside Heidi Klum and Claudia Schiffer. Nadja is currently 49 years old and has been out of the model business for 17 years. The former model is best known for her long legs, with which she even got an entry in the Guiness Book of Records. The blonde was discovered in Berlin, after she had completed her high school diploma. But even like with German model Heidi Klum, love didn’t really work out. She also made headlines with her charges of tax evasion.

Overview
1 Nadja Auermann’s career: Discovered in a small Berlin café
1.1 Model with longest legs in the world
1.2 Acting or rather on the catwalk?
2 Nadja Auermann’s fortune as a supermodel
2.1 Traditional models? Boring!
3 Mother of four according to Model Business
3.1 Nadjas life today
3.2 Do you know?

Nadja was discovered in 1990 in Berlin after passing her A-levels when she was discovered by a model scout in a small café. She decided to move to Paris to pursue her modeling career. As a model with the longest legs Nadja quickly managed to make a name for herself. One year after her discovery she appeared in the British edition of Vogue. Two years later the blonde even managed to get on the cover of the US edition. Soon every great designer knew the German supermodel. She signed a contract with the renowned model agency Elite, which opened many doors for her. Thus the model got herself numerous jobs at top fashion houses such as Dior, Dolce & Gabbana, Gianfranco Ferré, Prada or Versace and walked the catwalks in Paris, Milan and New York.

Model with longest legs in the world

The model even made it in front of the camera of star photographers Helmut Newton and Peter Lindbergh. Her trademark: Her super long legs with a length of 1.14 meters. At the end of the 90s, these gave her an entry in the Guinness Book of Records. Designer Karl Lagerfeld was enthusiastic about the pretty blonde and compared her look with that of the German-American actress and singer Marlene Dietricht. The model had even noticed her special look as a child:

“Whenever you saw a class photo of me in the past, you always had the feeling that I didn’t fit in. Because I was always taller and thinner than the others”

.
Despite all this, Nadja’s appearance helped her to conquer the international catwalk.

Acting or rather on the catwalk?

After several years as a supermodel Nadja discovered her interest in acting. After she got a mini-role in the short film ”Who Killes the Idea”, she even appeared on the screen of the movie ”Sleeping Beauty’s silent death”. Although the blonde enjoyed her life in public, she chose to spend the rest of her life away from the eyes of society.

Interested in the former supermodel? Then watch the following videos about Nadja’s talent on the catwalk!

Nadja Auermann’s fortune as a supermodel

Her fame provided Nadja with an income of up to 30,000 D-Mark per job. Thus the blonde received an annual amount of about 2.5 million D-Mark. Her efforts paid off even though the model had to travel to another country for a shooting several times a week. At that time, Auermann was one of the top earners in the model industry.

“I often worked for months on end, had to fly to another country three times a week”

.
Besides the hip model from Berlin, models like Heidi Klum, Claudia Schiffer or Karen Mulder also made a name for themselves in their time. As you can see, it’s not only the American models who have what it takes! But what is the current trend of the supermodel? And how does the career of a model develop nowadays?

Influencers and Bots as models, that is the new trend! Sure, conventional models like Nadja Auermann and Cara Delevigne exist. But are they our future? Influencers and bloggers are beginning to take over this role. Since platforms like Instagram and Tik Tok have become very popular, companies also see their advantage in this. Paid co-operations enable them to sell their products perfectly to the respective age group. The influencer becomes a model, wears the fashion of famous companies like Asos, Junkyard or Zalando and posts pictures or videos with you. The perfect marketing strategy. Interested?

Now there is a new hype: virtual models. They are created on the computer to also take on the role of influencers and advertise for companies. Although there is no real person behind the bots, they have an individual character and lead their own lives. Want to know more? https://socialmediaone.de/virtuelle-influencer-lout-zoe-ella-konkurrenz-lil-miquela-instagram/

Mother of four according to Model Business

Nadja Auermann’s biggest dream has always been to have her own children later on. With media manager Olaf-Björn Tietz, the model fulfilled this dream. Together they had a daughter, whom they named Cosima. Unfortunately this relationship was doomed to failure. A few years later Nadja made her relationship with German actor Wolfram Grandezka known, with whom she had a son. But also here the model had no luck and seven years later the divorce of the two followed. In the end she was lucky with the psychiatrist from Bonn with whom she is still together. That his name is not known is perhaps a good sign. A private relationship without the constant attention of the media is what the former model likes best in the end!

Cosima and Nick, two of the blonde’s four children, also aspire to a career as models. Currently Nadja lives in Dresden and spends a lot of time with her family. Cosima is the spitting image of her mother and, like Nick, also benefits from Nadja’s considerable size. So nothing stands in the way of her modeling career!

Although the German model had made a name for herself worldwide and was popular with numerous fashion companies and designers, she was charged with tax evasion in 2011. As a result, Nadja had to pay a fine of 90,000 Euros, she got off lightly. Unfortunately, the model did not learn from her mistake, and just under four years later she was charged again. The blonde had to get rid of almost 50.000 Euro. At that time, her former fiancé, actor Wolfram Grandezka, was also charged.

You want to know more about Nadja’s life today? Then watch this YouTube video:

https://fivmagazine.com/wp-content/uploads/2020/09/nadja-auermann-model-catwalk-laufsteg-designer-fashion-mode-frau-hair-mode.jpg 801 1200 Lisa-Marie /wp-content/uploads/2021/02/fiv-magazine-vips-interview-fashion-style-home-interior-magazin-prominente-mode-einrichtung-logo-gif-instagram.gif Lisa-Marie2020-09-18 07:00:252020-11-10 15:45:19Nadja Auermann: The model with the longest legs in the world