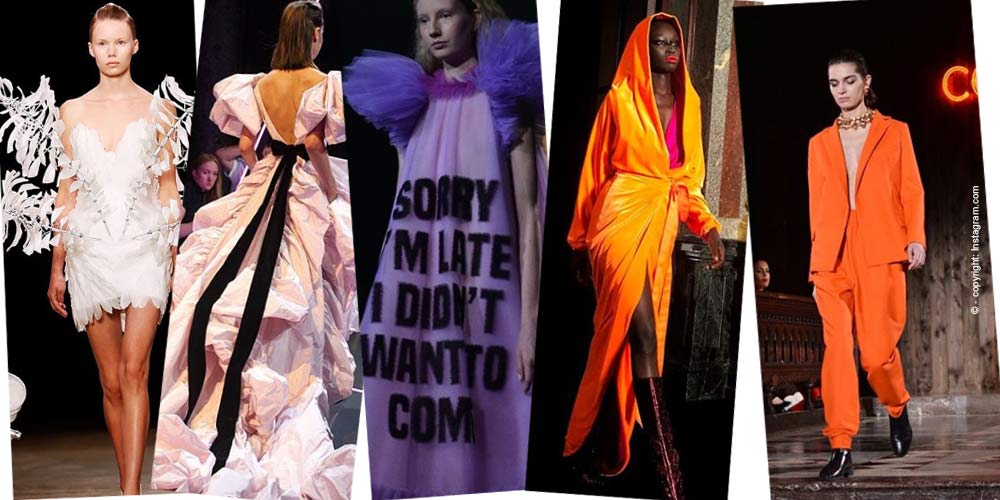 Fashion Week Haute Couture Autumn/Winter took place from June 30 to July 3, 2019 in Paris. Every year, the best French and international designers gather to present their new collections. This year again, they presented their collections with a strong passion for rhinestones, sequins, knits and feathers. At night, women, music, their origins and dance inspired their creations. FIV magazine has made a selection for you and gives you an overview of the Fashion Week Haute Couture Autumn/Winter 2019 in Paris.

The Georges Chakra Autumn/Winter 2019 Couture Collection is an extravagant homage to Hollywood’s Golden Age, combining the sophistication of Rita Hayworth, the glamour of Lauren Bacall, Olivia de Haviland’s blondness and Audrey Hepburn’s guaranteed femininity. The collection is inspired by the look and elegance of film legends. Georges Chakra has imagined an award ceremony in Los Angeles or a private evening in Santa Monica. His Autumn/Winter 2019 collection is like a film, each garment is multi-faceted. Lon or 7-8 dresses, jumpsuits and flow suits, corsage jackets with textured shoulders, strapless dresses with trains, these pieces summarize the wardrobe of Hollywood stars. Georges Chakra plays with superimposed materials, playing with color, texture and brilliance, great classics that he picks up again. Each selected material gives the piece the unique touch of a movie star. 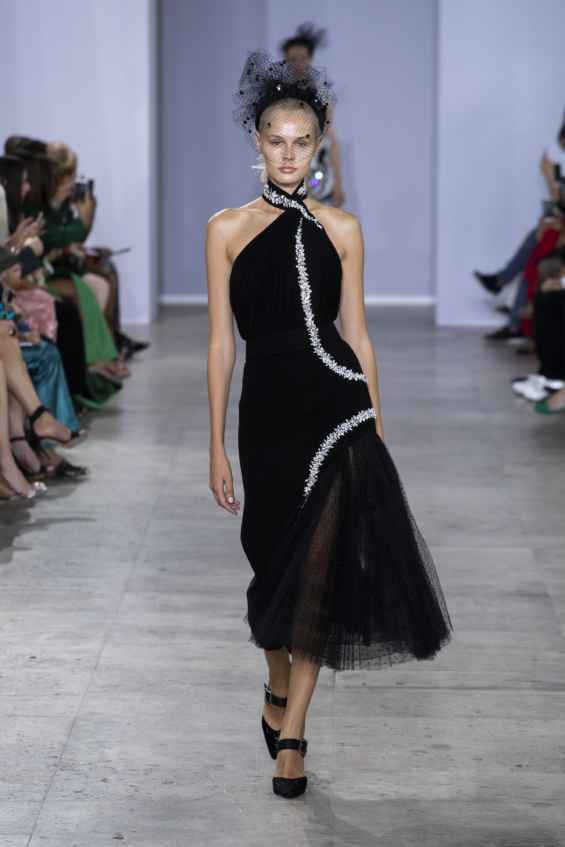 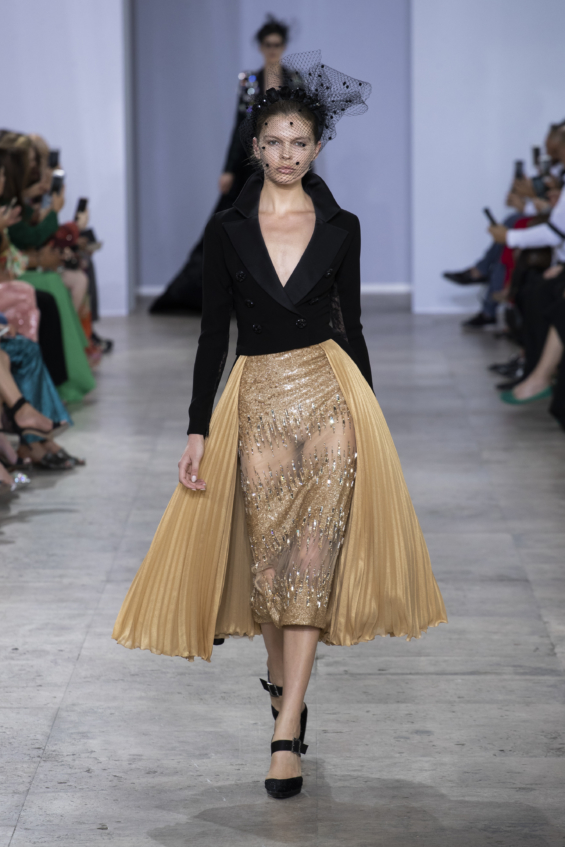 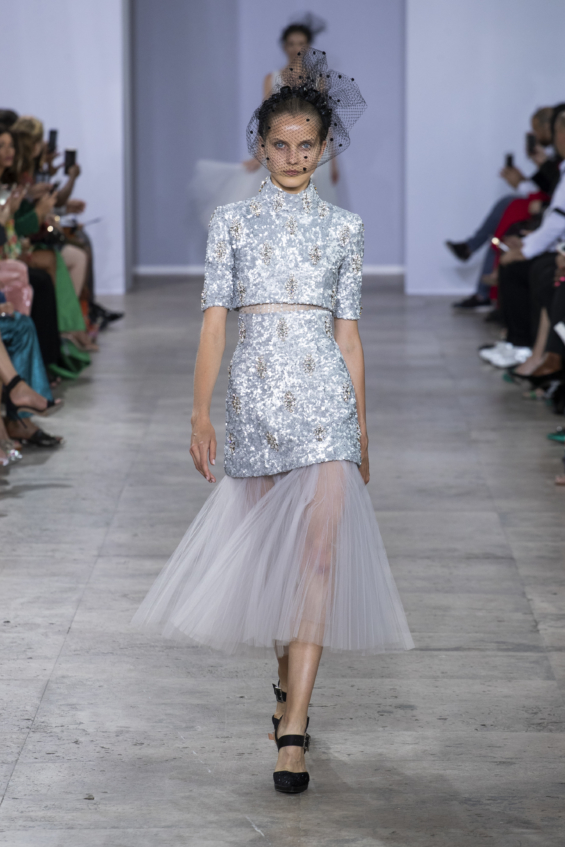 Nicolas Jebran has created his own Golden Odyssey for his Autumn/Winter 2019 collection. For him, this collection is a milestone on his way as a designer. This journey brings together days, nights, moments, smiles, people who carry in their lives, their will to succeed, their obstacles, but also their adventures and experiences. Nicolas Jebran reveals through his creations what has happened in him. He decides to share with his admirers his own world in which everyone can imagine his own world. It tries to make us travel and dream. Each dress tells a story, and each story has a hero, and each hero has an odyssey, and each odyssey leads the audience into a world of fantasy in which there are no borders, no barriers. 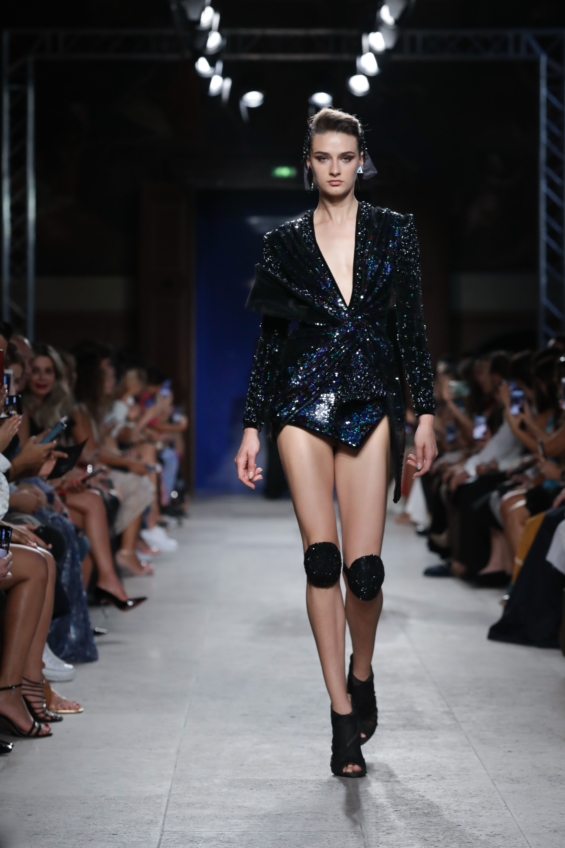 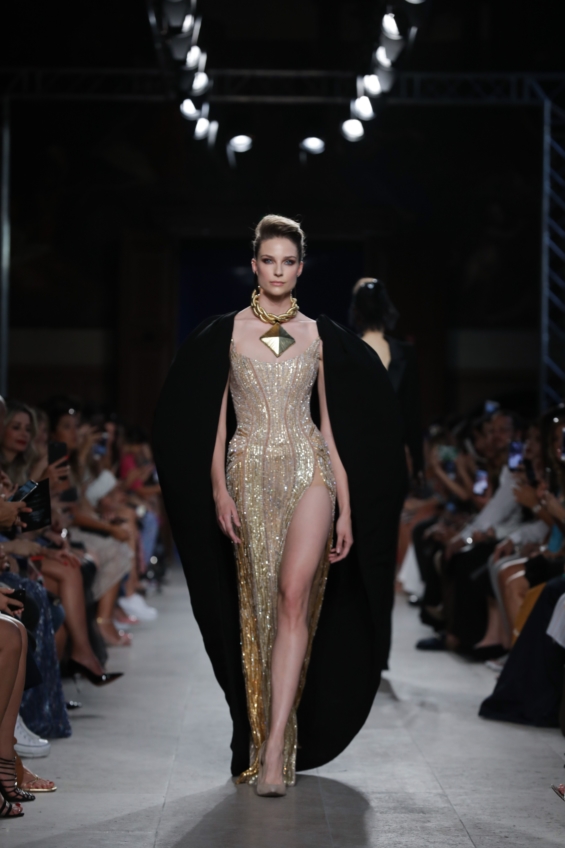 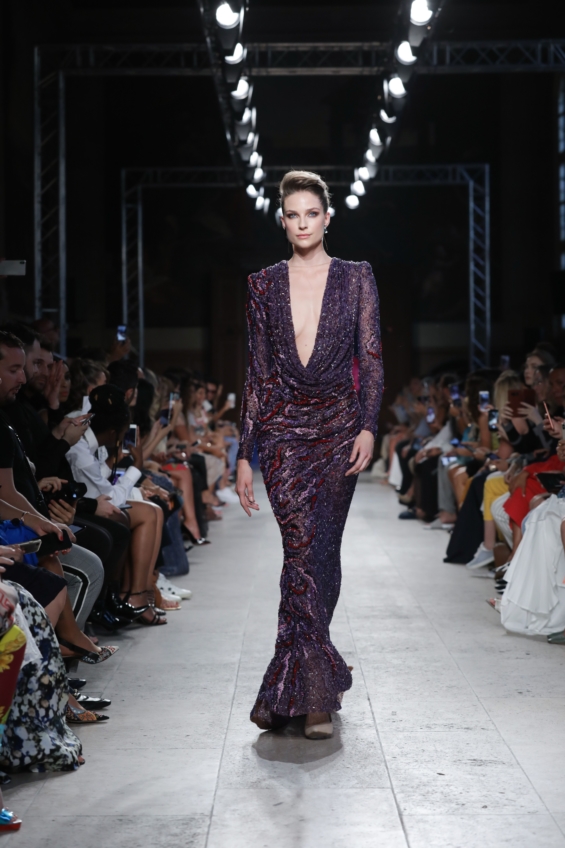 On Tuesday 2 July, Julien Fournie, the chic designer, presented his new Haute Couture Autumn/Winter 2019 collection in Paris. This year Julien Fournie presented 30 creations for his Autumn/Winter 2019 collection, a collection entitled First Spell. On the occasion of the tenth anniversary of his house, Julien Fournie pays tribute to women who derogate, transform and transcend the social codes which were designed to enclose their gender. Since the dawn of time, the most terrible spell was always cast on these ladies. The French Grand Couturier masters every trick in the art of the cut modernizing into evil beauties the mythical silhouettes of witches, poisoners, gothic novels dames and film noir stars alike. High collar, embroidered shirtfronts on pleated chiffon blouses, paired with long Edwardian skirts. 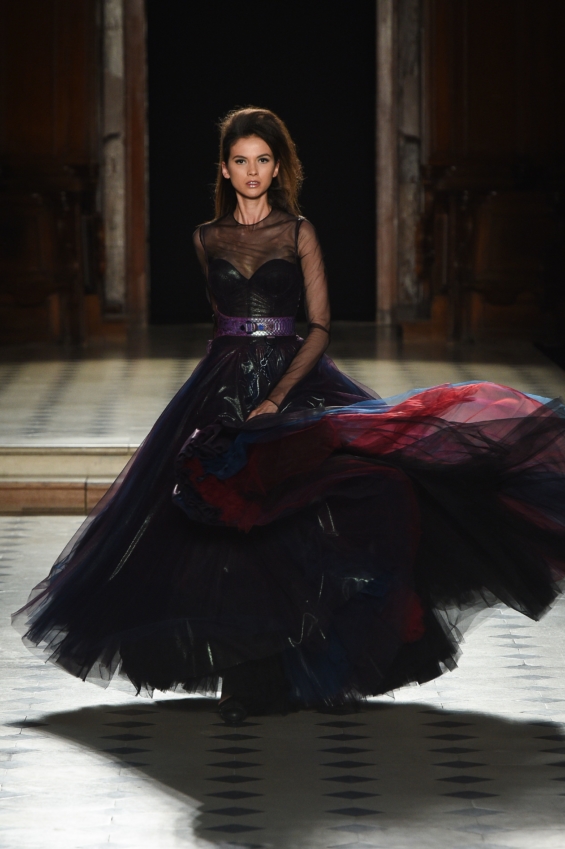 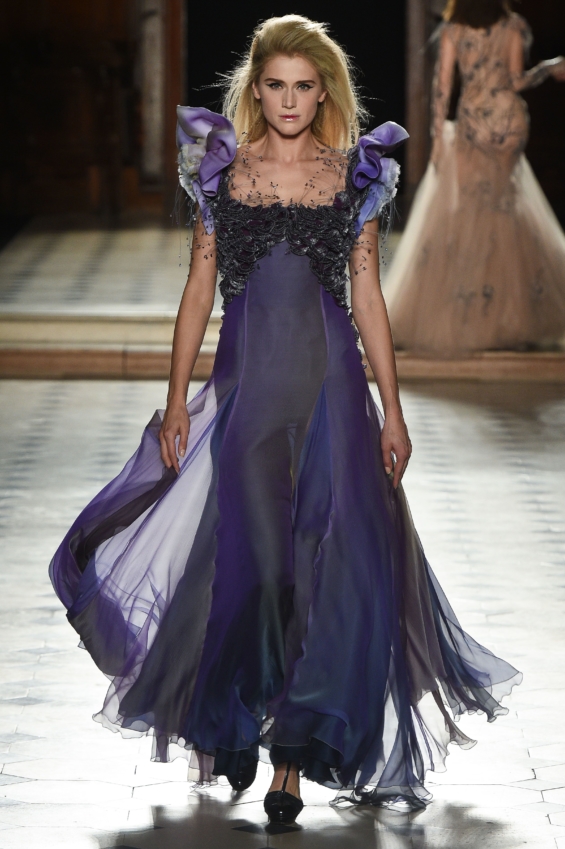 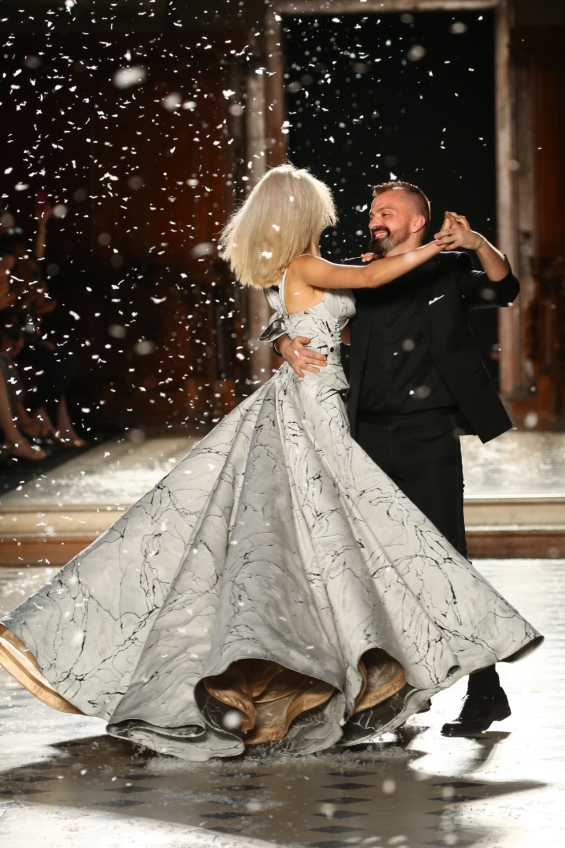 Life and death are never only religious statements or philosophical thoughts, it is also a domain that artists never stop exploring and expressing. The approach to the Middle Ages, life and death are no longer just poetry chants. With the loss of beloved ones, you wonder what it will be like when the journey ends. Since death is inevitable, I prefer to imagine it as a dream, an alternative universe parallel to this world,where everything returns to its original state of true pureness and beauty. It is the startof a mysterious journey.

On July 3rd, Guo pei has presented her Autumn/Winter 2019/20 Couture collection at the beaux-Arts of Paris. Under the magnificient glass dome of the Cour Vitree hall, a whole new universe emerges. Here, light and darkness co-exist, angels and Satan sit next to each other. For this collection, pineapple hemp fabric, the treasured material of the Philippines, is widely used. Crows play an essential role in the Guo Pei Alternate Universe. At the border life and death, crows are the messengers of wisdom, shuttling the universes for his compatriots in the forms of hand-embroidered beetles, spiders, butterflies and bees. Behind each arch in the realm created for the show, is a meditative journey guarded by devils and angels. Here, gods have human nature, humans have animals nature, plants and animals are given godhood – giving life to the Guo Pei Alternate Universe.

The Maurizio Galante 2019 collection is dedicated to Mexico and its traditions. It is a tribute to these ancestral cultures that have managed to find a balance between man and nature. Resplandor is also a tribute to the first travellers of the old world. Maurizio Galante’s creations are like a travel book because of their colours, volumes, fabrics and embroidery. On almost every one of his creations we find boleros inspired by bouquets or natural architecture.  Some pieces pay tribute to the past, to the know-how of 16th century tailors, but they also bring an avant-garde dimension, thanks to a sculptural work of superimposed geometric elements. Each face of the models was surrounded by metal jewellery in collaboration with the artist Carlos Piedras. Mandarin, papaya, plaster, creamy white, night black, mint green, magenta, cochineal are the wild colours of the Italian designer’s new collection.

The Italian-Persian stylist Farhad Re presented his first couture collection on Sunday 30 June 2019 in Paris at the prestigious headquarters of the Italian embassy. The romantic collection tells the story of the women of the future who leave an increasingly contaminated earth behind for a new planet. Embodying the sculptures of dresses with details such as sidebands and folded organza that resemble the pages of a book, she takes the most precious creation of mankind, culture, with her quest. The collection shows Farhad Re’s love of contrasts through the use of colours and the choice of fabrics, nude shades combined with the hardness of black, questioning the lightness of organza with the stiffness of python leather that cuts the romantic lines of silk dresses. The collection’s integrity is a mysterious and unpredictable blend of romance, dressing a sophisticated and delicate woman. For the FW19 Couture collection, Farhad Re wants to surprise and use embroidery, not to make the dresses richer, but more interesting and unique, just like a beautiful book that we enjoy not because of the number of pages, but because of the surprise it holds, and that fascinates the audience not to think about the end, but to enjoy page after page. 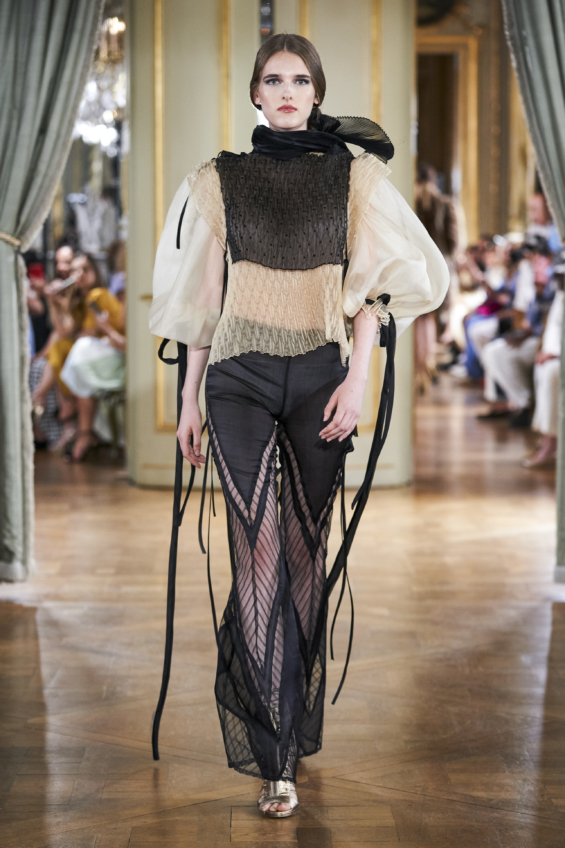 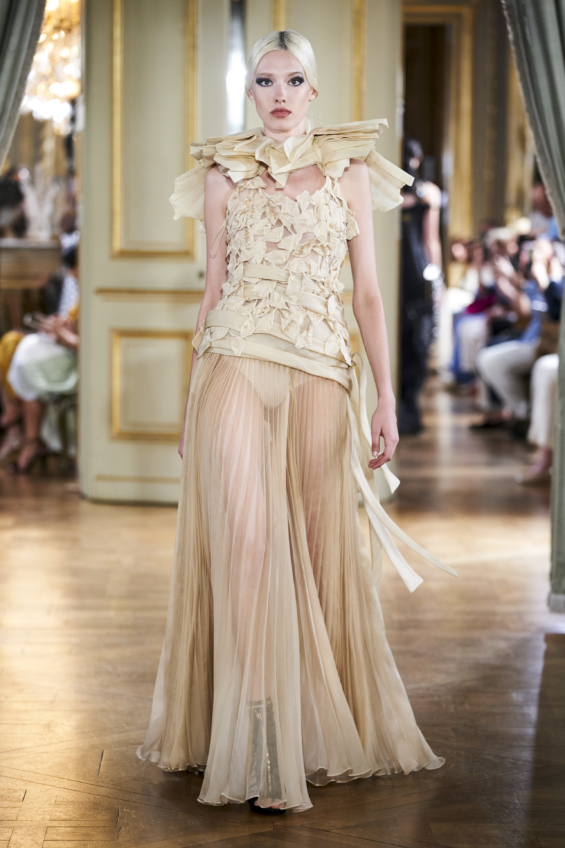 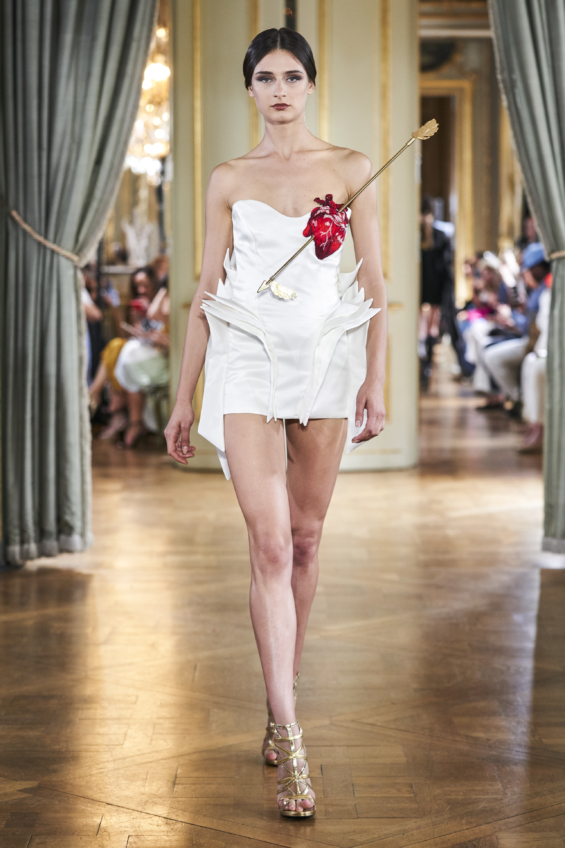 Since January 2017, GEORGES HOBEIKA has been an elected guest member of the Chambre Syndicale de la Haute Couture. Every year, Maison Georges Hobeika creates clothing, haute couture and wedding models with passion and harmony. Once again this year, Georges Hobeika has created a magnificent Haute Couture collection to sublimate women. Guided by a deep love of fauna and flora, Maison Georges Hobeika’s Autumn/Winter 2019-20 Haute Couture collection pays tribute to the wild majesty sent soaring on the bright and flamboyantly colored feathers of the bird of paradise. Celebrated for its extraordinary dance that crowns a captivating, seductive, and passionate courtship ritual, the bird and its signature aerial grace is vibrantly echoed in the imagination of Georges Hobeika. This breathtaking collection reveals a haute couture virtuoso whose designs highlight the magic of flying, the universal joy of dance and the power of freedom. 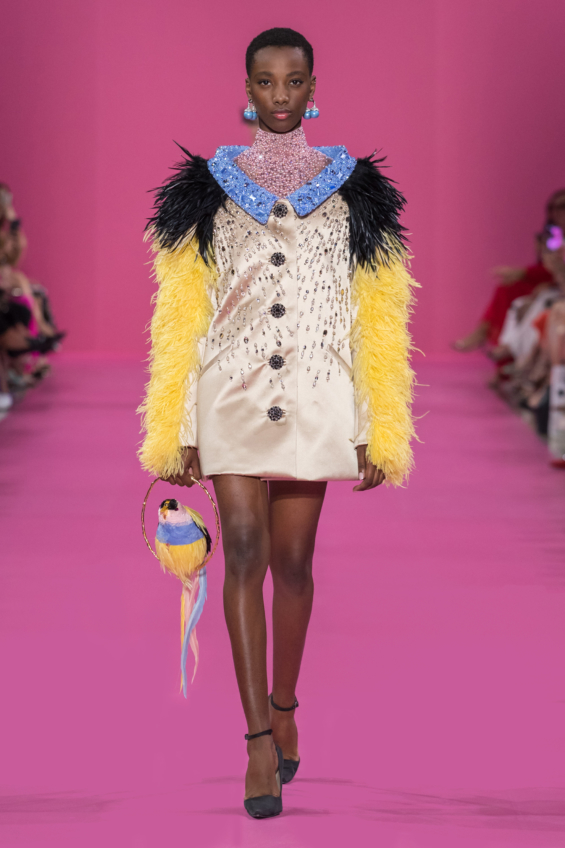 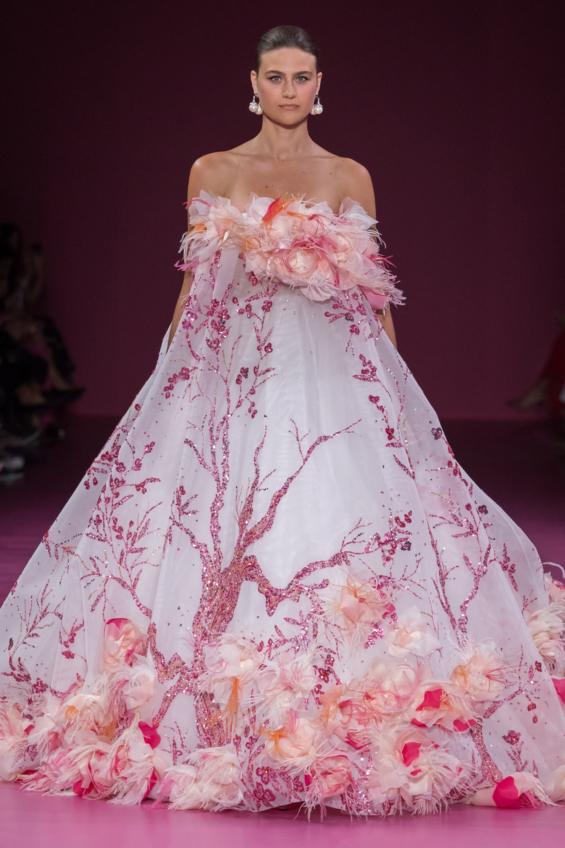 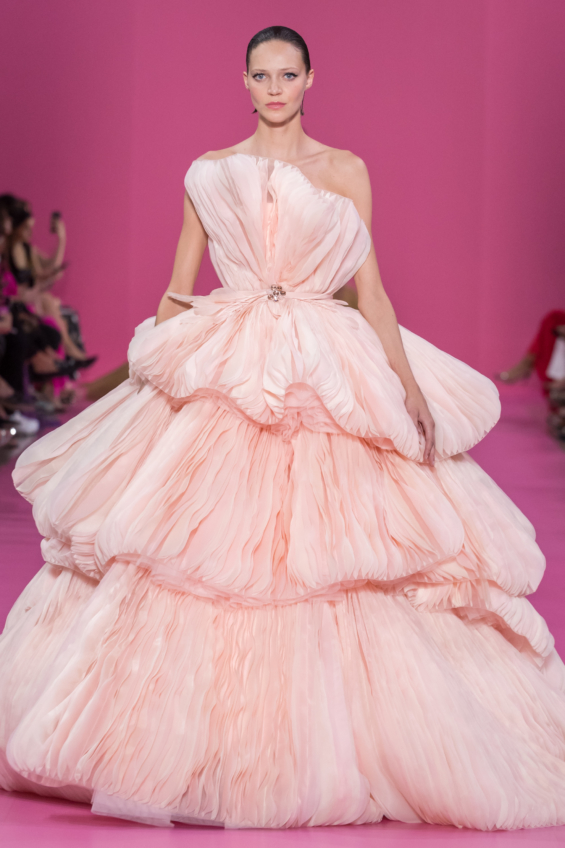 Celia Kritharioti is an innovative Greek designer who combines elegance, finesse and femininity. This year, Celia presents an Autumn/Winter Haute Couture collection called Pas de deux. The designer drew her inspiration for her creations from her childhood by creating a music box with two dancers. Nude, grey and black woollen skirts, hand-embroidered bodices, length on the floor and small dresses. Silk and top talent, organza and velvet pear on the podium, pearls are the central theme of the collection. Ostrich feathers, one of the most popular materials of the designers, are taken up again in this collection and form their trademark. 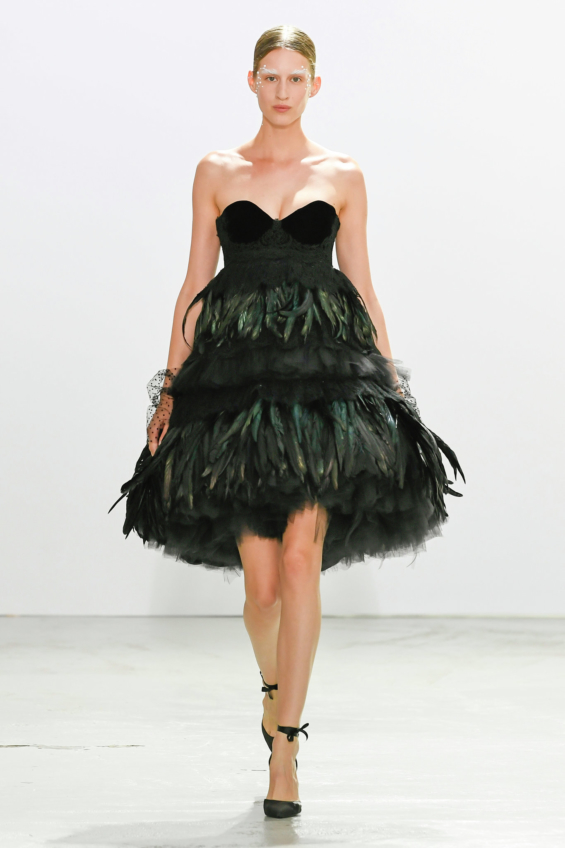 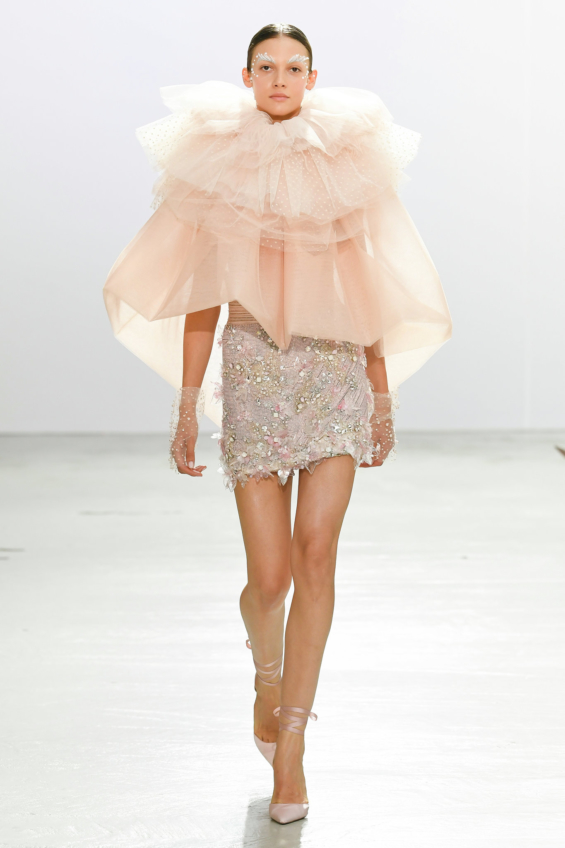 Bowie Wong, an Australian designer born in Hong Kong, is constantly inspired by the combination of his Asian and Western cultures and his theatrical influences. His new collection, Haute Couture Fall/Winter 2019 Night Blooms, is a meditation on the mysterious and powerful relationship between woman and night and pays tribute to the strength of a woman’s identity in full bloom.Several pieces throughout the collection, including a continuous black extract and a shimmering purple one-piece piece with powerful shoulders, present sufficient sophistication as one could imagine from a samurai warrior or gladiator. Night Blooms is a revelation of femininity and fearlessness, celebrating the awakening of a sense of self, showing a case woman as warrior and queen of the night. 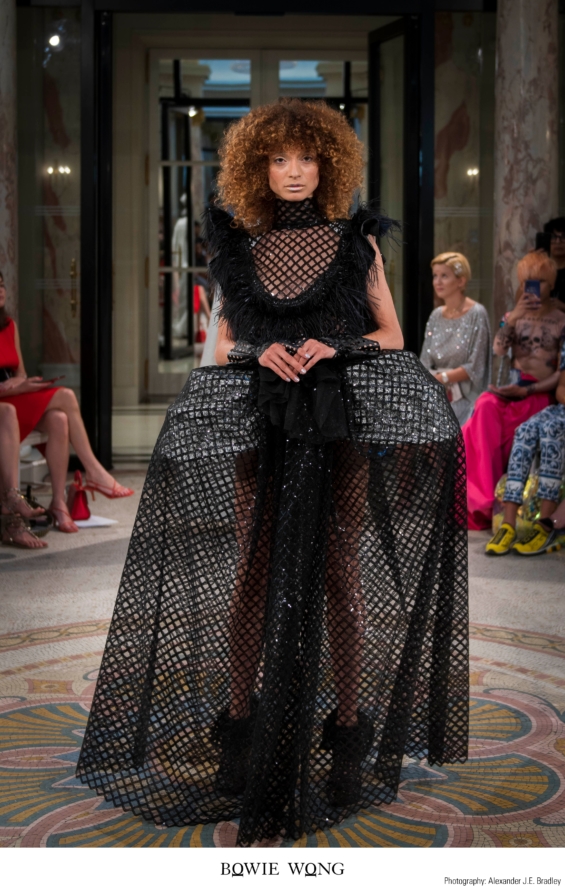 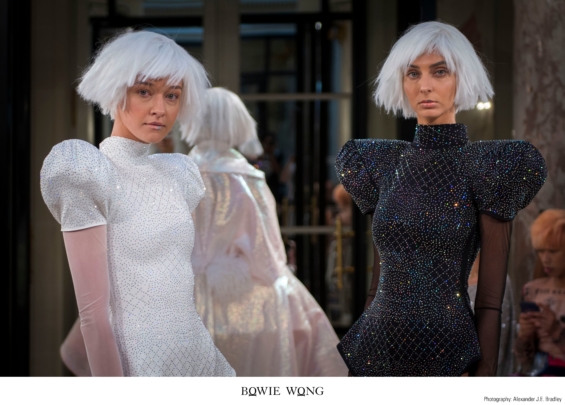 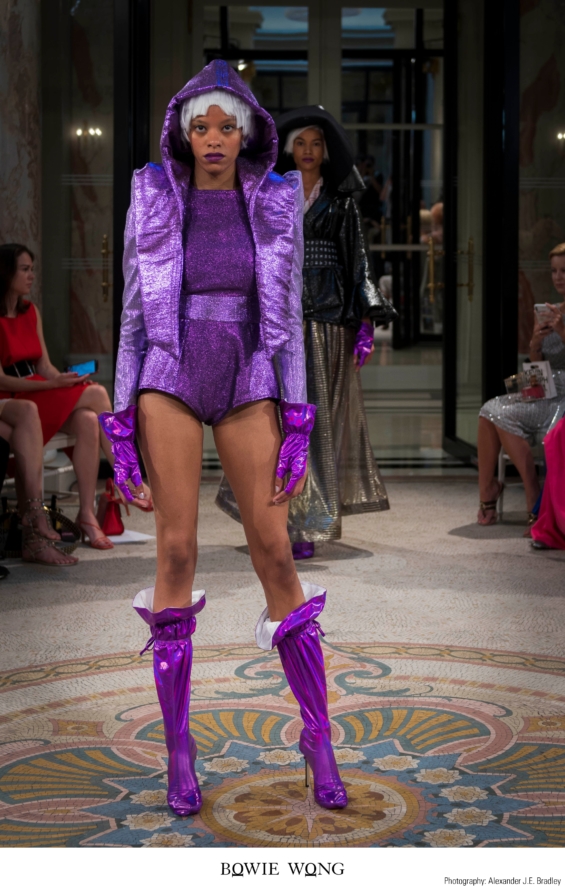 Maria Aristidou is a Cypriot designer, after two seasons of luxurious clothing, in July 2016, she laid down her first couture collection during Haute Couture Week in Paris. This year Maria presents a new haute couture collection called Clair de Lune. Through this collection she draws inspiration from the charm of the moon and the eternal and heavenly struggle between light and darkness. Each of her creations is sublimated with accessories and jewellery in harmony with the theme of the Autumn/Winter 2019 collection. The net used by the designer is made in Cyprus and accentuates the feminine silhouettes. The use of precious yarns and elaborate techniques makes it possible to set sparkling accents that refer to moon dust.