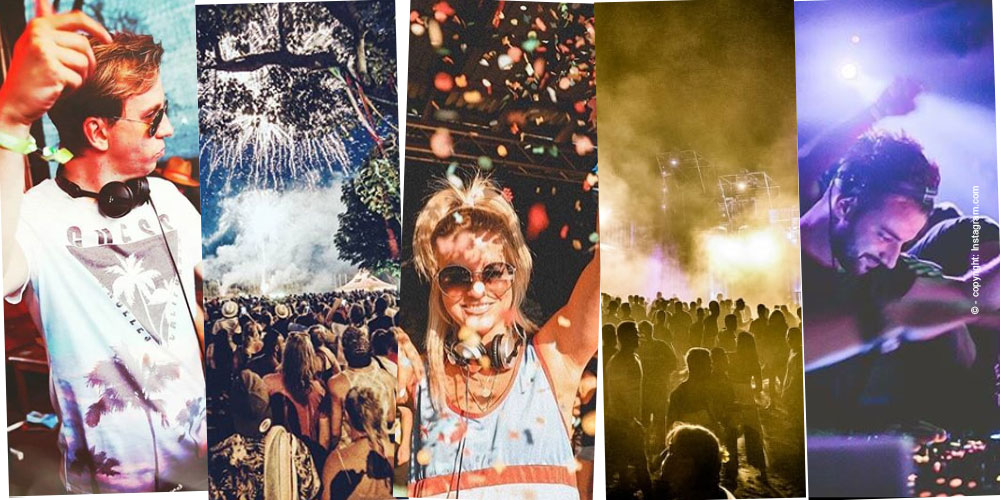 It’s warm, the beer cold and the tents set up – the festival season begins. People from all over the world travel to Germany to celebrate the different festivals. From Rock am Ring to Splash!, the selection is huge, so fans of every genre will get their money’s worth. We at FIV have selected the top 13 festivals for you, which you should definitely know for 2019.

The most famous rock festivals in Germany are Rock am Ring and Rock im Park. The twin festivals will take place at the same time from 07.06.2019 to 09.06.2019. On three days the Nürnburgring in Rhineland-Palatinate and the Zeppelinplatz in Nuremberg are made to tremble. Music from every style is played on a total of four stages, so that everyone gets their money’s worth. The Rock am Ring / Rock im Park Festival is a guarantor for big live acts, which is why the next year will again see the appearance of well-known and internationally successful artists. With a setup of approx. 90 bands and a number of visitors of almost 100.000 variety is pre-programmed, the mood is exuberant and it is an event what every Rock / Pop fan should have experienced. Also for 2019 acts like Slipknot, Die Ärzte or Tool are already confirmed.

The festival scene also has a lot to offer for electro fans. Every year in July there is the Helene Beach Festival, which attracts 25,000 eletrofans to the Brandenburg city of Frankfurt Oder directly on the Polish border. With four stages, the Helene Beach Festival serves directly at Lake Helene, which provides a welcome cool-down during the high temperatures. Lake Helene was even voted Germany’s most popular lake in 2016 and offers Europe’s largest sandy beach. So if you want to experience an unforgettable summer party, you’ve come to the right place with the 150 acts in total. So we packed our swimming trunks, didn’t forget sun cream and off to the beach party of the year.

From 28.06 to 30.06.2019 the time has come again. The Full Force Festival opens its doors to up to 30,000 metal, hardcore and punk fans. Since 2017 the festival takes place in Ferropolis, Gräfenhainichen (20 km from Dessau). With headliners like Beatsteaks and Apocalyptica the Metalheads will also get their money’s worth. The location has been changed several times due to the constant growth of the festival goers, now it even has shuttle busses which are provided to get from the campsite to the festival area.

The Hurricane in northern Germany is a festival that is well known to everyone. A festival with which one can inspire followers of all music directions since 1977. Rock, pop, hip-hop, electro – diversity is the order of the day. On two open-air stages and a tent stage we celebrate until early in the morning. Originally known under the name “Es rockt in der Heide”, it has become one of the most famous festivals in the country in recent years.

The Southern German Pandent to the Hurricane Festival in Northern Germany takes place in Neuhausen ob Eck im. The former military area will be transformed into an incredible festival area. Top DJs and other international artists come together at this mega event to make the stages quake. The festival started in 1999 and now almost 60,000 people travel to one of the largest parties in the country every year. The Southside Festival coincides with the Hurricane Festival and the Twin Festivals also share the line-up.

The absolute classic among the open-air festivals is Wacken. Every year up to 90,000 metalworkers from all over the world make a pilgrimage to the small village in Schleswig-Holstein – Wacken. Anyone who is interested should not forget his rubber boots, because once it rains the festival turns into a gigantic mud battle, which doesn’t harm the mood at all. An absolute must for all Metal fans!

Once a year Technofans get together to celebrate the Fusion Festival in Lärz on a former military airfield. Guests of the festival should be able to live out their freedom. Uncontrolled and casual. The unique concept of the organizers makes you feel like you’re in another world. Every year around 70,000 people from all over the world visit the colourful spectacle. We at FIV can only recommend to every technofan to get involved in this experience.

The place to be for every electro fan in Europe is the Nature One Festival. It is not only one of the largest but also one of the best in Europe. Every year around 65,000 visitors come to the event to hear the best DJs of the electro scene live. Up to 300 DJs and LiveActs perform on a total of 4 Main and 19 Club Floors and ensure an unforgettable experience.

Of course we also have something for the Reggae fans – The Summerjam Festival in Cologne. Every year during the hot season the Summerjam at the Frühlinger See offers an exuberant atmosphere.  As one of the biggest festivals in the reggae and dancehall scene since 1985 around 30.000 people come together every year to spend a breathtaking time. With artists from international industries such as Africa and the Caribbean. Next to two stages, where dancing and singing take place, there is a large food mile where everyone can find something.

EDM and Electro fans watch out, Parookaville is waiting for you. As THE EDM Festival in Germany, which exists only since 2015, it attracts already 80.000 fans (tendency strongly rising!). The festival takes place once a year directly on the Dutch border in the town of Weeze. What makes the festival so special is the idea of creating a kind of village for all festival visitors, how crazy is that? You even get your own “passport” to enter the village. So grab your bags and off you go to the Parookaville in Weeze.

Of course we haven’t forgotten our hip hop fans. The place to go for you is the Splash!. It enjoys international popularity and up to 20,000 visitors from all over the world flock to Ferropolis to experience this event live. Hip Hop stars like Casper, Wiz Khalifa or Macklemore have performed there in the past. 2 main days and 2 party tents await you.

The Deichbrand Festival takes place directly on the North Sea coast of Cuxhaven. On a total of four stages on the grounds around the Nordholzer Seeflughafen, renowned artists from the rock, pop and indie scene perform. That’s reason enough for the 60,000 visitors to travel there. At the dike fire you also have the possibility to stay in the so-called Comfort Village and to rent an allotment garden, a wooden hut, a tipi tent or an igloo for three persons or more for a small contribution towards expenses depending on your preference. Swimming or other activities on the North Sea beach are therefore planned and even expressly desired. A festival with additional beach holidays: For us more than reason enough to call the Deichbrand Festival one of the best festivals in Germany.

The Rave Indoor event of the year is the MayDay. Compared to the other festivals it’s only 14 hours, but that doesn’t make it any worse. The rave party of the year takes place from 7 o’clock in the evening until 9 o’clock in the morning. More than 30 different live acts and DJs characterize the evening. You can sleep in a car or in an accommodation as there is no camping site available.